Sewing Retreat!! (AKA Died and Gone to Heaven)

We arrived at the Lake Morey Resort in Fairlea Vermont (see Here) around tea time on Monday 19th after a longish drive from Woodstock. We were joined on the bus by Elaine Pillsbury (owner of Sunshine Carousel Quilt Shop & tutor) and Marion Adams (tutor) who greeted us with a warm welcome before ushering us down to the SEWING ROOM (it was a conference room really but who cared?) which had been already set up with machines, cutting equipment and irons, quilts hanging up to show the projects we could work on plus fabric & notions for sale. The view from the windows was straight out of  'On Golden Pond' with trees just showing the early signs of Fall, houses on the opposite shore, a light mist floating above the trees and Loons swimming & diving on the water. 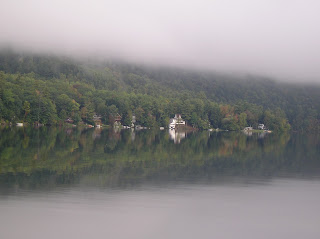 There were introductions all round including Laura from New York (the only American on the retreat), followed by some short demonstrations on an 'elf and safety' theme :-)))) we were informed that we could 'put our slippers on and not take them off till we boarded the bus to leave' and 'sew all night if we wished'.  In every room (ours was big enough to be a suite with a view of the Golf Course!) there were goodie bags containing Notebook & pen, perfumed candle, udder cream and some sweeties, Sheila and I unpacked and had a cuppa before going down to dinner in the restaurant which was - you guessed it!!! overlooking the lake, after food to die for some of the party went downstairs to start sewing. The rest of the days that followed were quiet (well Almost!!!) and peaceful with the sound of whirring machines as some of the girls worked on their projects aided by Elaine and Marion, while others including me worked on our own  hand projects brought from home.
On Wednesday the weather was clear and very warm, arriving in the sewing room we were told this would be the day of the Balloon flight pre - booked by 2 of our party, we were all asked if we would like to go and see the 'lift off' and of course everyone did. Around lunchtime a whisper went round that 'someone else' has asked to go, after a bit of asking around I discovered it was Sheila (now before leaving the UK we had discussed this and agreed that we would not be doing it!!) right I thought if she's going so am I!!!. We left for the airfield (which was actually more a large field)  around 4pm and met Brian our pilot. Now there's an eccentric man, he's the proud owner of what he calls the Rusty Dusty Museum where he has collected just about anything and everything you could think of including a lifebelt reputed to have come off the Titanic, and a sculpture made from crutches that climbs up through the ceiling into the 2nd story of the building,  AND he's adding to it all the time, we were shown his extensive collection of Balloon 'baskets' including a canoe, and a Messerschmidt car which, we were assured, they not only could fly but have!!! Several years ago one of Brian's buildings collapsed and from the resulting pile of wood he built the Vermontosaurus which is life sized, here you can see some of the girls taking a look at it. 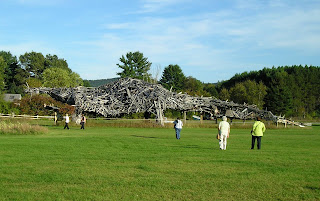 This was about the last picture I persuaded my camera to take, after this it was definitely not 'appy! I believe Heather took some of us taking off and if I can get hold of a copy I will post it later.
We then helped Brian get the balloon ready, and climbed elegantly  into the basket (not easy!) and we were off. I have never been so terrified in my life and could hardly believe what I was doing! - me who gets dizzy on the stairs! but I would not have missed it for the world, it was absolutely beautiful, and so peaceful, drifting up over the forest towards the mountains. At over 1 mile high we could see the Lake and Hotel in the far distance, one of the passengers an elderly gentleman named Walter was asking lots of questions about the Mountains then explained he had worked in a Logging camp in this area at age 14 and had canoed the length of the Connecticut river alone14 times during his life, we later discovered he was 94 years old and still working!!!! What a man. After about an hour Brian looked for somewhere to land and chose a pull in/lay-by on the side of the highway, this I thought is going to be interesting as UV's slowed to wave to us, however with the help of the 'ground team' and some passing motorists we were safely down. After packing up the balloon we drank a Champagne toast to all the intrepid 'flyers' returning to the hotel for a late dinner. The rest of the retreat was continued in a similar restful vein with lots of laughter good food and good company and most of the party almost completing their projects for a Show & tell. Di our tour organizer presented Elaine & Marion with some flowers as a thank you for all their hard work. 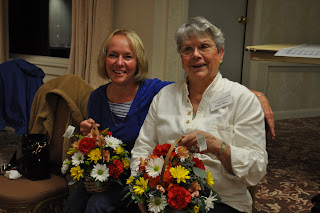 and the final night dinner was poignant to say the least here are two pictures of all of us taken by Laura (sadly the one person I don't have a picture of!)
Well I thought we were all there but now I notice Doreen is missing, I think she's hiding behind Susan in the top photo so here she is with her quilt top made in 3 days!! 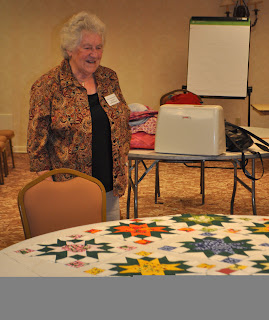 Well that's it for this post see you all again soon with the final part of the trip . I'm off to CTQ tomorrow and I have to pack a few thing.
Lorraine
Posted by Lorraine at 22:55