I promised to get back here and here I am...
During May 1/2 term while DD needed a few hours to herself, I took little H to visit Saul Junction on the Gloucester Sharpness Canal,  We had a wonderful 'sunny funny' day with lots of laughter, after taking a walk along the towpath to look at the many and varied narrow boats moored up, we saw a real Pirate ship, luckily this was moored on the other bank so we were in no danger from the trusty crew!! (who were actually life sized models but, H was not convinced and did not want to get any closer) 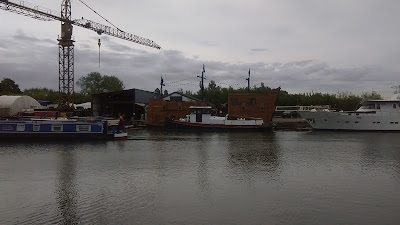 we ate our picnic near one of the lock gates, and 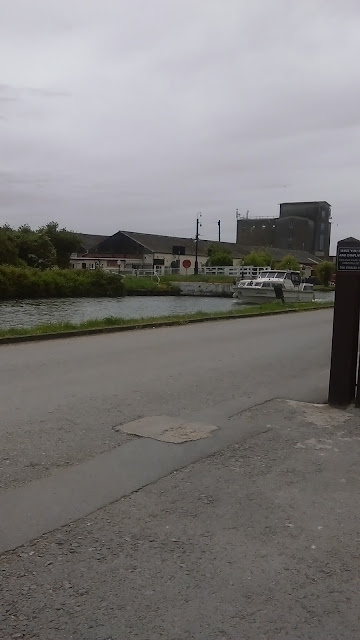 every time a pleasure craft came through she was jumping around shouting 'there's another one Grandma'. Such a simple almost free pastime (parking is a £1 for 4 hours!) but she loved it and some of the folks even waved to us, (even more exciting!) After lunch we traveled a few miles down the road to St Augustines Farm Park where we followed a Treasure Hunt and Little H learned to milk a cow, without any instruction she simply sat down and got on with it! 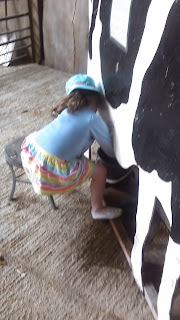 She had fun on the assault course - I was exhausted but she kept going round. 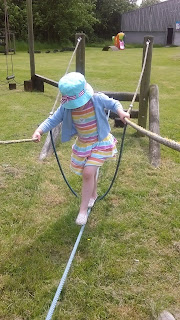 I used this outing as a means of practicing the use of a Sat Nav (borrowed from DD) as I had to go on a long journey. The reason for this huge adventure was to visit my best friend Laura, who moved to Arthog, a tiny village near Dolgellau/Barmouth in Snowdonia with her family almost 3 years ago, and is in the process of setting up a longarm quilting business.
Ever since she left I have been saying I would visit, BUT - it was a long journey (4+ Hours) and I had NEVER driven that far on my own.... so I kept finding reasons not to go, but finally a date was agreed. The day dawned (13th June) I packed the car with everything I would need (and quite a lot I didn't need!) SO with the Sat Nav firmly attached to the windscreen, with maps marked with the route by DS (in case the sat nav failed of course!) and with knees knocking visibly, I set of in trepidation. Of course the sat nav DID NOT fail and I got to my first stop (Builth Wells) where I had a break for some tea, toast and toilet. From there on I found myself surrounded by some of the most beautiful scenery I have ever seen. 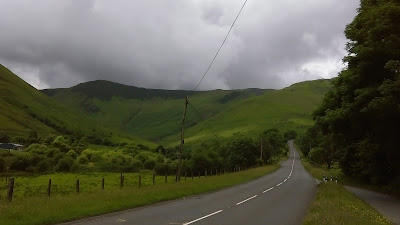 Arriving safely at the other end I have never felt so proud of myself. There followed three blissful days spent sewing. With her eldest taken to school, Laura was able to join me, though of course there is a limit to how many times you can sit a 3 year old in front of 'Frozen' in one day. I was spoilt rotten and was not allowed to do anything except make the occasional cuppa. To avoid Poppy getting completely square eyes, on Wednesday morning we set off after the school run to Barmouth where we played on the beach 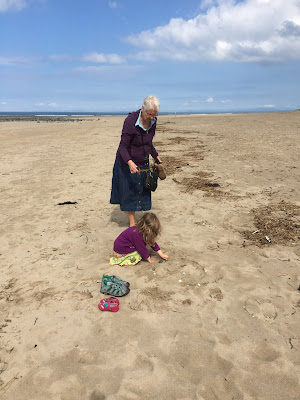 and paddled (Oh how I have missed walking on the beach and paddling. sigh!!) followed by a leisurely cuppa with yummy Welsh cakes. Then all to soon Friday came and it was time to repeat all of the above only in reverse, I got lost once (but found myself again!!) and navigated some floods caused by a huge thunder storm and torrential rain that fell throughout most of the journey.
Arriving home with my batteries recharged and inspired to continue with the sewing project I had worked on at Laura's, within a couple of days I had finished this.. 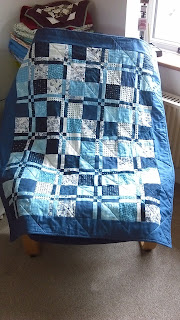 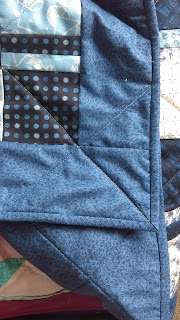 the Disapearing 4 Patch started a couple of months ago at CTQ and now aptly named Brynhyfryd Blues (Brynhyfryd is the name of Laura's House.)
Then I raided the UFO box and found this 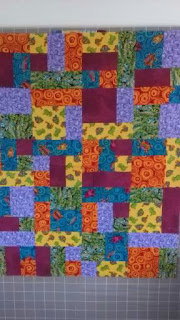 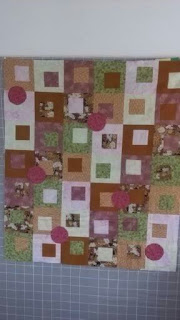 and a Disappearing 9 Patch project started at least 6/8 years ago, the 9 patches are already cut, however I cannot remember what system I was using to re-assemble the blocks so I'm making it up as I go along, I have quite a few more blocks to do but so far it looks like this, what do you think? 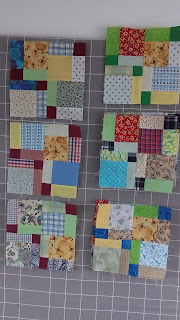 Posted by Lorraine at 22:22 No comments:

As most of you will realize I have been absent for a while, but during that time I have not been idling, though sometimes I think there must be a leak of time in my life as I suddenly find its Friday (again!) and once more I have not managed to get here to talk to all you lovely people. Let me give you a quick round up of events (hopefully without boring you!!)

Well there's the usual round of taking care of my dear Mum whom I can't believe will reach the grand age of 90 in September. Then there's the dashing off to DD's to help with her Slimming World groups/dog sit and babysitting weekends etc. I have been doing some knitting, currently with 3 projects on the needles, one that just needs the neckline done but I think there is something wrong with the pattern and I simply cannot fathom it out unless I'm missing something. (Quite possible I accept) as after 4 attempts its still not right. I am working on an Intarsia project for Little H Yes! Yes! I hear you reminding me that I swore I would never do another one after Maisie Mouse, but she loves this pattern and Grandma is a sucker for those big brown eyes and sweet smile!!!!! and this one promises to be a lot easier (who am I kidding here!) and a new technique of a baby sweater which is worked from the neck down and will have no seams - interesting eh!

During April we had some lovely weather, so I took a view from the Sewing room window, its quite a different view of the garden,  now looking out onto the patio and into the Apple tree (lots of birds to distract me) 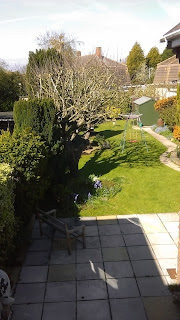 While enjoying the sunshine I made these little bookmarks.

At the end of April it was my birthday, I received lots of pretty cards and some lovely gifts. I bought some raffle tickets from the Wool Stop during Yarn Shop day and my birthday week ended with the news that I had won a wonderful hamper full of  knitting goodness. 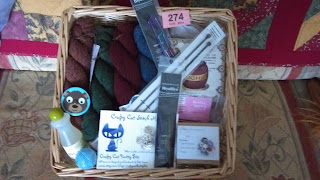 The May meeting of Clock Towers Quilters brought forth some show and tell, Julie had made a pretty bag, 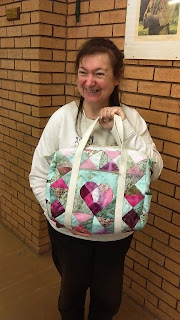 Heather and Sheila had both made baby quilts 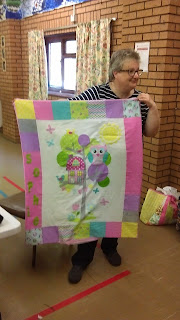 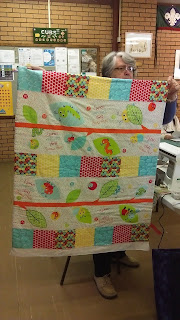 Mollie, Carol and Pat had completed their Disappearing 4 patch quilt tops, and in the background you can see Carys 'beavering' away. 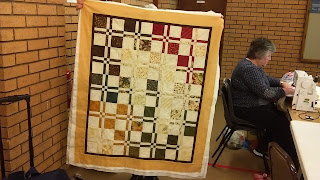 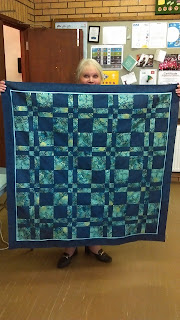 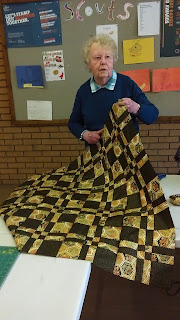 THEN don't ask me how but I sprained my ankle, simply by standing up to walk across the room! In this picture taken later in the day you can just see the bruise on the right hand side of my foot, which had gone a very funny shape.Within a few more days it was very 'pretty' in shades of blue and black. Boy did it hurt AND it was my 'machine driving' foot AND only a couple of weeks before Malvern. 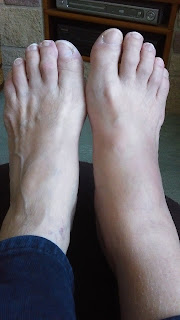 As I was being told to rest it the only thing I could do was resort to hand sewing, so out came the embroidery box, then in a period of utter boredom I joined Pinterest, OMG its so good!!!! and I have to say quite good for losing a couple of hours, one project caught my attention, on a page labelled 'A Million Little Stitches' I saw an idea for embroidered books, so while sitting down I managed to cut out some Calico 'pages' and tacked around the edges of each page leaving a 'design area' of 6"x 4", 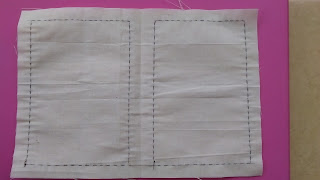 I intend to fill each page with a different embroidery stitch and I have started with Chain Stitch in as many variations as I can think of, I plan to work on it in quiet moments between big projects, and will try to show you each page as I complete it. Luckily my ankle was much better by the time Malvern was due to open so I decided to give it a go, I took a few pictures to show you, though I'm sure many of you were there. I'm afraid I did not get any names for these and I must apologize for being unable to give due credit to the makers.
The following was best in show, and was stunning both in the technique,  the execution of the piecing and the wonderful colours. 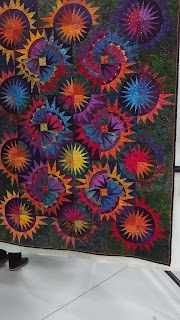 This one was very interesting, lots of hand embroidery and colour wash style techniques. 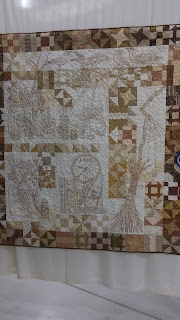 and I loved this one which had also won several rosettes, it was beautifully embellished with numerous sequins and beads. 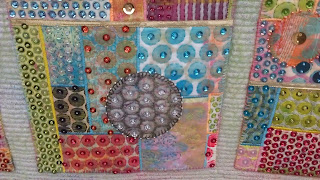 Well I think that is enough of me for one day so I will sign off with a promise to come back tomorrow and bring you up to date with the goings on in my neck of the woods.
TTFN
Lx
Posted by Lorraine at 22:26 No comments: