Hi there lovely people,
I was just 'tidying' up my blog and discovered that I had completely forgotten to post this, I had left it in draft to come back too. (Give me a doh! here folks) So, I thought as I was sat here playing on my new laptop while a well known Craft show runs on TV (Yes! its true! I'm a closet Create and Craft fan!!! but please don't tell anyone!) so me thinks I better get this out there and continue my massive catch up promised oh so long ago before the festive jollity of Christmas.
October.
Well here I am again, a little later than planned, but time is just running away with me! Its December already and have I started my preparations? well yes but only in a small way - I have the cake and mince pies a few stocking fillers and not much else. HELP!!!!
October was a season of mists and mellow fruitfulness in the garden and I took these picture early one morning when the sun was shining.
while in the front garden this beauty was still in full flower... 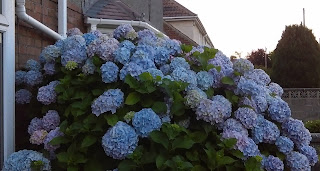 So what else did I get up to in October well frankly not much there was Malvern of course, and off I went with the Lovely Lisa, I wanted to do some workshops, so booking those was a priority, I signed up for Jane Davies (of course! I just love her workshops and her stitching generally!) and she even welcomed me as 'One of her regulars' how splendid is that? Jane once again came up trumps with a pretty wool embroidery 'something', it was designed to be a mobile phone case but I don't need one of those as I have a nice leather one, but it was as always a very enjoyable class. 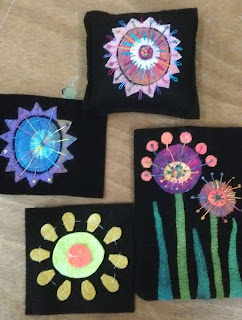 Jane quickly got us sewing and encouraging us to use our imagination in placing all the ready cut shapes, the picture above shows some of Jane's samples and the one below is my attempt to re-create the technique. Mine will not be finished until I decide what it's going to be! bit big for a needle-case at 6"x 4" perhaps, any suggestions? 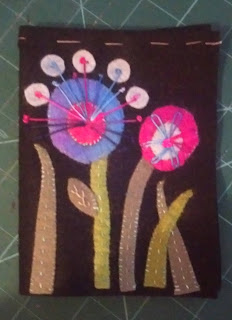 Then as there was not much else I fancied I booked an hour with Gail Lawther. I was disappointed here to find that this class was not so inspiring, she spent around 20 minutes telling us all about herself and her work plus she had done a lot of the work in advance. The class, billed as Crazy Patchwork, was for a hanging bird like this, (Gail;' own) which I think definitely looks more like stained glass patchwork. 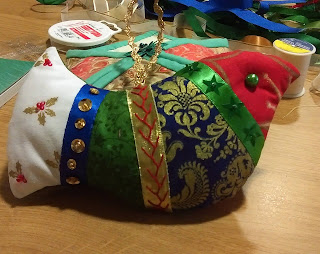 Unfortunately she had pre-sewn all the fabrics to the foundations so all that was left to do was attach ribbons along the seams and add some embroidery details.  Mine is not finished yet...but all the materials were supplied so I'll get back to it at some time.
Below are are some of the quilts that caught my eye. 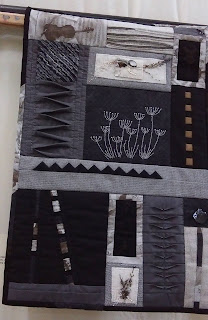 This one I could have taken home with me, a study in black, white and grey is entitled 'Nature' by Maria Wiontzek and Dixie Bayly 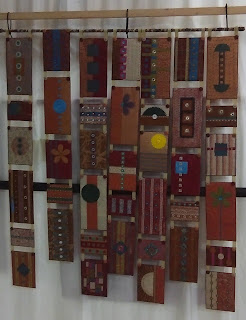 This is 'Paper Sun' by Jenny Rolfe, all the techniques seen here are on paper which had been painted and embellished. And last but not least was this one. 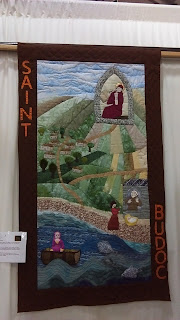 This is 'Saint  Budoc' by Falmouth Quilters and was one of several on show all produced during a challenge by the South West Quilt Group, to produce a piece of work depicting a Saint. This one jumped out at me as my darling Dad was not only born in Falmouth but was born in Budoc House, a place that I am having trouble finding out about in my Family History quest - I didn't even know 'Budoc' was a saint until I saw this quilt.
I finished some knitting, mainly this baby Blanket to be given to one of two friends who are expecting in February. 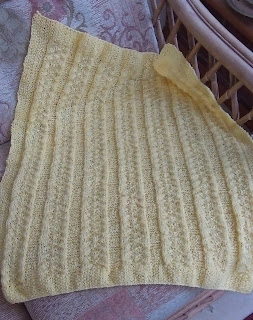 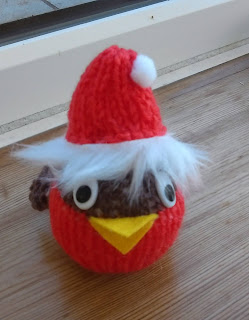 At the end of the month was Severn Valley Quilters meeting, I had been looking forward to this as 2 ladies from Thornbury Museum were coming along to tell us all about the 'Thornbury Coverlet'. I have mentioned this in previous posts after the coverlet was first found in the outhouse of a farm, and it is now owned by the Museum. The coverlet will be put into storage after tonight as there is nowhere to hang it in our little Museum, so I took this opportunity to take a few pictures, I'm afraid the full picture is not brilliant as the chairs were in the way 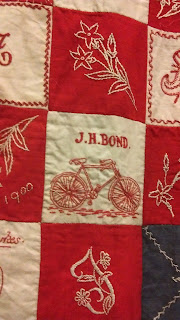 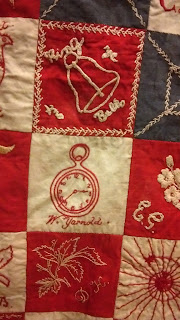 Made as a Bazaar quilt to raise funds for a new vicarage, the squares on the rest of the coverlet are all embroidered by local ladies of the time, mostly wives of traders in the town. The one with the pocket watch on it is the Jewelers where my Dad bought my Mum's engagement and wedding rings, so is very poignant for me, and Mum remembers many of the business's as they were still trading when she was growing up.
At this point in time the NEW ROOM is almost done, just a few finishing touches like a door and we should be there, pictures next time!
That's about all for now.
Lx
Posted by Lorraine at 22:30 No comments: