Well my friends when I signed off from my last post little did I realize that I would be gone this long.
As mentioned DD was due for a Gall Bladder removal op on 9th September, and the plan was all in place, or so we thought. I was 'booked" to arrive on Tuesday and stay over till Friday to do the school runs and to give her a few days help. However just prior to being discharged as planned on Thursday morning DD collapsed in the shower coming round up to find 6 or 7 nurses standing round her, that she was on oxygen and a drip!!! (of course being her, her first thought was that she was still wearing the hideous paper pants worn during surgery!) it seemed her blood pressure had crashed and her red blood cell count had dropped from a normal 184 to a worrying 60. She was kept in over the weekend "for tests" so of course I stayed on to help out. She arrived home on Monday14th (after being told they did not know why this all happened!!!!) she looked ghastly, was constantly falling asleep and feeling very unwell. By Thursday she was not feeling much better, had a sizable Heomatoma (not sure I spelled that right) on her left side plus all the wounds had become infected, she was due at the GP's to get another blood count test, so they gave her some antibiotics and said it looked like she 'Had been pulled about a bit!' then said they would see her again in a few days to repeat the blood test.
Later that day at 4.45pm to be precise, DD is having a lie down, and calls out for Hubby, he comes back downstairs to say DD is experiencing typical Coronary symptoms and an ambulance was on its way (Oh ****!) By 5.15pm she had been rushed back to hospital, where she was admitted again and remained till the following Monday (21st). A coronary was ruled out thank God! but despite all the tests they are still saying that they are not sure what went wrong but, there might be a slight possibility that her liver was damaged during the op causing some internal bleeding!!!! The Heomatoma was by now from her navel round to her spine, over her hip and down into her groin.(Hello!!!!) So having gone to stay for around 3/4 days I was there for 17 days. Throughout all of it our little Princess was angelic, going to school without any fuss during her first two weeks, going to bed and managing to not be too upset at not seeing her Mum. I am so relieved that my darling daughter is now well on the mend but so sad that she missed this important part of her daughters life.
On other fronts there has been a considerable amount of progress, being on his own for almost three weeks DH managed to not only look after himself but also cared for Mum, (who by the way turned 89 on 4th September) doing her shopping (not an easy task - you should see her lists!) popping round every day and doing odd jobs etc BUT he also made progress on the BIG BUILD! my room now has walls a ceiling and a floor and looks like this. 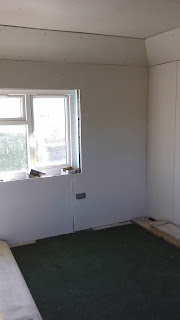 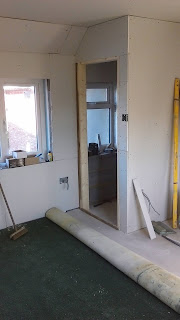 These 2 show the room itself, first one is towards the front window from the doorway and the other is the back window & doorway taken from the front, you can now see the 'new' little landing and the landing window. Both the side walls are now plastered and drying out nicely. Isn't he doing well? I could be in by Christmas (but not holding my breath!!)
Before Little H started school I entered her into our local Flower show, she was well up for the challenge (her first big craft undertaking) and she did so well coming home with not only 2 firsts, 2 seconds and a third prize but also £6.50 in prize money only missing out on a Silver trophy by one point. She was thrilled as you can imagine and here are her entries. These are all her own work DD was very firm that it should be! She made the pictures at home supervised by Mum and did cooking with her Dad then decorated the hat and 'built' her garden here during a sleepover on over Friday night/ Saturday (5th) which was show day, (she was so keen we were Building the garden at outside at 7.30am ) 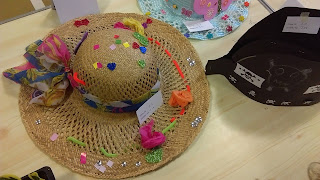 Well that's about all for now, I had some success at the show too but I'll tell you all about that next time!
Byeee
Lx

Posted by Lorraine at 10:44 No comments: