Well my Friends you all probably think I have dropped off the planet but I am alive and kicking and still here! It's probably been well over a year since I was here.
A LOT has happened in that time, YES I'm still quilting & knitting but really I have been spending too much time on U Tube (tho I've learned a lot!) this is now a lot easier via my new TV rather than the small screen on my phone. I also joined Facebook - another place I spend a lot (too much) time (this time via my phone!). I have always said I would not join FB but when my Good Friend Lisa jetted back to the States in June 2017 I decided it would be a good way to keep in touch. Via FB I have joined a group called Memory Zoo Creative Community run by the lovely Katie Jane Silverthorne who runs a business of the same name. I have made a few friends there and took part in some Pattern testing which was most enjoyable.


In other news I still attend Severn Valley Quilters and we have had some really good speakers. Clock Tower Quilters also continues, though we have had a tough 12 months having to move venue due to building works. We are now in a local (to me) church hall which trebled our rent overnight tho I have to say its a much nicer room. We had lengthy discussions which resulted in an agreement to increase our annual fee (1st time in 11 years) we cut out the December meeting and as we had lost a few members, some had moved away and sadly we lost one of our founder members Carol to Cancer.


It was agreed we would take on some new ladies, as some of you may know we are a 'closed' group so this is done by invitation only. However we now have 4 new ladies, we all get along just dandy and so we continue.
I joined a newly formed U3A mixed craft group which meets one Wednesday afternoon each month and is very enjoyable with a variety of crafts being worked on by the members. Earlier this year we all pooled our talents to make a Group Banner using our various talents.
Below is a selection of pictures in no particular order to give you an idea of what I have been up to in my absence.
In October last year I went to the Autumn quilt show at Malvern where I took part in an indigo dying workshop, I had tremendous fun and produced 8 little pieces of indigo dyed fabrics (which were actually 2 men's hankies cut in four. below are some of my samples which I plan to use for a Boro Sampler later on. 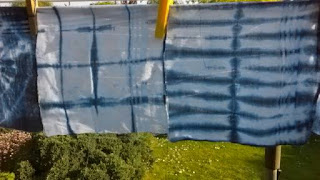 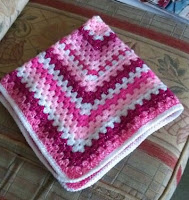 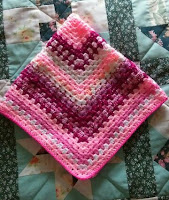 I am still  making quilts for Project Linus these 2 are complete and handed over, the one on the left is a Double 9 Patch and the right hand one are some donated orphan blocks plus I have one 'under construction and one which I am in the process of binding

As I mentioned earlier I have been learning through You Tube. Though I have been able to crochet for many years I have only ever made Granny square projects in the form of blankets however my talents are now improved and I have been making lots of hats, scarves and scrappy blankets and I'm currently working on a shawl. In the background of the green hat is the Linus quilt I'm working on 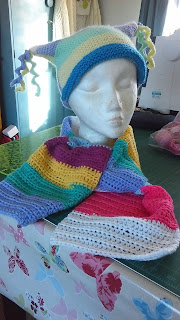 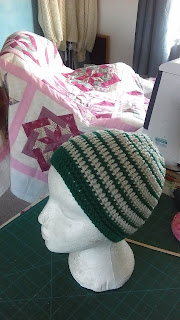 Earlier this year I was thrilled to be asked to be a Godmother to one of our close friends children, Oscar who is 2 years old. His baby Sister Louisa was to be Christened on the same day and so that she wouldn't feel left out I made her a knitted Blanket in a lacy pattern, then I was asked to also be her Godmother (doubly thrilled!) I bought them both Silver picture frames as Christening gifts but passed on the blanket anyway. 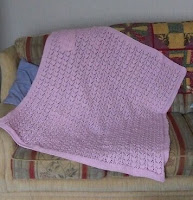 Also on the knitting front are these two made to try and use up the 'stash'. The wreath was my contribution to our Museum's tribute to WWI. (more pictures at the end.) The hat is from an old pattern and was fun to make using an odd 100gm ball of 'Rainbow' yarn. The child's scarf is made using 1 ball of variegated eyelash yarn and some some solid pink 4 ply yarn, I worked 2 rows of each yarn alternately. I love the way it has come out in zig zag stripes 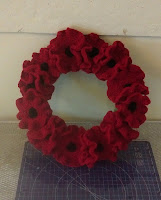 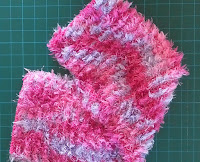 Last but by no means least is this Knitted Nativity made by the ladies of my Knit n Knatter group who meet twice monthly in a local Baptist Church, to whom it has been donated and where it will go on display. This was great fun but frustrating at times as the patterns called for some very small components. 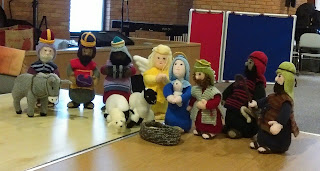 Severn Valley Quilters Charity Project for this year is to make 'Fiddle Mats' for New Sibland School who cater for children with all types of disability. As you can see I made several. 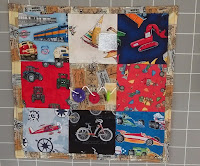 At the beginning of the year I finally got my hands on a Janome Gem sewing machine, I have been trying to get one for ages but as they are now out of production its taken some time. But thanks to the wonderful Mark Pickles of the The Sewing Studio Bath my mission is complete.
The idea was to let my DGD use it as she is now 7 years old and very keen to use a 'proper' machine. I have an antique hand machine but despite a thorough overhaul I just cannot get the tension right so... hence the Gem. H is not long enough in her legs yet to reach a foot pedal and the Gem has a stop 'n' start button. So using 'Grandma's new machine' (it will be hers in due course!) she finished off the apron she had started and moved on to a knitting bag, here is the finished project with which she is delighted. Now all I have to do is teach her to knit!!! 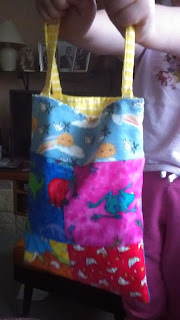 After a marathon effort by the volunteers at Thornbury Museum the end result of all that knitting is the lovely WWI window display and 'swathe' of poppies now on display till the end of the year. A few white and purple poppies were included to commemorate peace and the animals who were used during the war - Horses, Mules, Dogs and Pigeons. 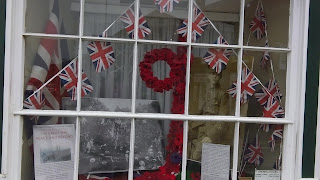 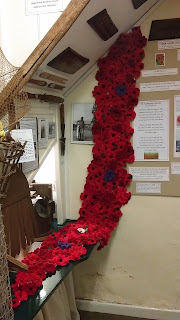 AND FINALLY we have a new member in my Family meet Barney (formerly Ginge) who came to his forever home at the beginning of October. I rescued him through New Start Rescue Centre and he is a purrrfect gentleman, and is the apple of my eye. He had a very sad story as his previous owner died of cancer age 43 leaving 3 children, 3 cats and lots of rabbits/guinea pigs, the Grandparents are taking the children etc but were unable to have the cats due to Grandad's allergy's to cat fur. The 3 of them were brought in while I was there and Barney and I just clicked. 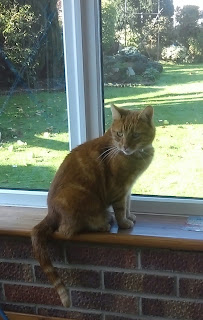 Well that's about it for this time I will try to be a better Blogger in future but that's all for this time. TTFN
Lx

Posted by Lorraine at 20:23 No comments: