As I said just before I left yesterday, S.V.Q were having a talk by Stephanie Crawford and she did not disappoint. A lovely lady who spoke fluently showing her work as she explained her inspiration and methods. I would say she is not a quilter in the true sense of the word but more an artist who paints on fabric, then embellishes with machine stitching and a little applique to give some depth, and WOW what a show we had. I asked her if I could take a few pictures and she said "just take as many as you want". So I snapped away and this is the result, the colour is probably not as clear as it should be as the hall windows are very high. 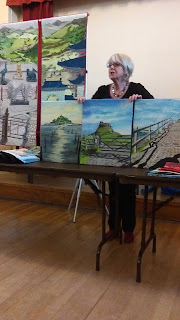 The pictures she is showing here are about 20" x 30" and taken from photographs taken by her husband during a holiday visit to Lindisfarne.
There were 2 large panels on show both were final pieces for her C&G which was taken in 2 parts several years apart. The first an online course, with the Kemshalls. The final piece for that was based on her memories of the 60's. Each small  panel was aboutu12" square. 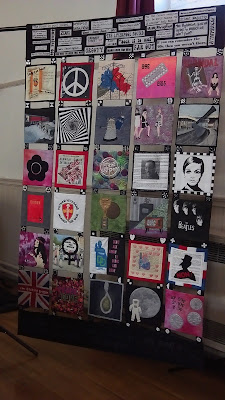 I guess you need to be a certain age to remember some of the events depicted, a few of them were, the Pill, Ban the Bomb, Martin Luther King and Twiggy, while across the top were popular sayings of the era here's a close up 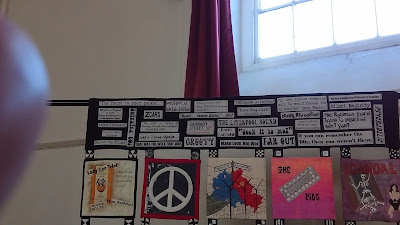 The black panel at the bottom states 'I was at Primary school at the beginning of the 60's and at college at the end'.
The next large piece was 3 panels and featuring memories of travelling through China on a holiday to visit her son and was the final piece for the 2nd part of her C&Gs course taken through Missenden Abbey. 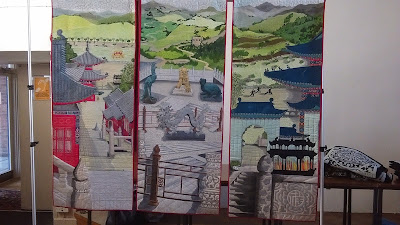 The next couple of pictures are of smaller pieces which she makes as Journal quilts and are challenges set by members of a Contemporary Quilt group she is a member of. 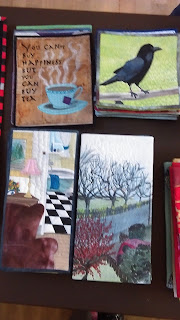 and the final picture is an enlarged version of one of the Journals and is entitled 'Glimpses', Stephanie explained she loves perspective and likes to show glimpses of rooms seen through doorways, leaving the viewer to decide what may be happening. Very Clever!! This one is a Flower Shop, its on top of another pile of work but its edges are outlined (bound) by the narrow black and white stripy fabric. 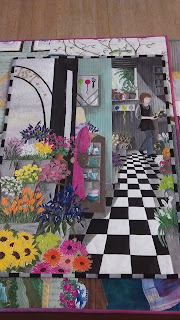 Throughout her talk she encouraged all to 'have a go', to try out new techniques by making Journal quilts and had us all believing that we could do this, but I have my doubts. At the end we all sat in stunned silence for a few minutes before we broke for coffee and biccys.

Today I have been sewing again, I needed a bag to hang on Mum's wheelchair so I decided that rather than pay the earth to buy one I could make it!!! it actually proved a lot easier than I anticipated AND its completely reversible, I added a little tab and buttons so I can fasten it if needs be. A bit more of that furnishing fabric put to good use too!! 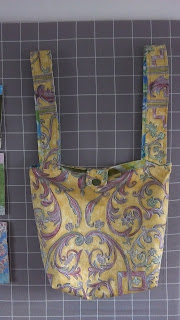 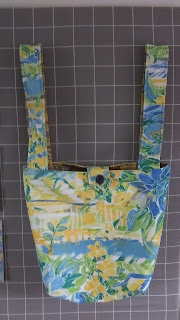 That's all for now so take care.
Lx
Read more »
Posted by Lorraine at 19:52 No comments:

This will be a picture heavy post my friends - I hope the kettle is on so you can enjoy a nice cuppa while I bring you up to date. I have to report that thanks to my very good friend Lisa (HI Lisa :-D) who came by 3 weeks ago to help with the covering of the 'design wall' using Kaffe Fasset Gridded flannel bought for the job (and purchased HERE) , -  well I say 'help' when in fact..... 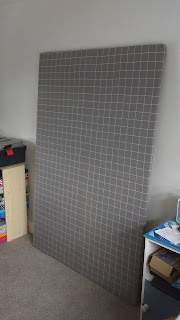 ....she crawled around the floor of the room for over 3 hours with staple gun in hand and did all the hard work while I stood around with a hammer, occasionally banging in errant staples that had not gone fully home and acted as Gofer. So lets hear a huge thank you to the lovely Lisa!
So now the room really is finally completely done and as I said last time very inspiring to work in. I had some of the fabric left over so I decided to make myself a new ironing pad cover to replace the slightly grotty cover already on it.
I used an old 18" cake board that had been hanging around for ages, laying a new pad of toweling onto the fabric and centering the board on top I pulled the edges over to the back, then starting with the centre of each side I worked my way round pinning it in place.

which allowed me to neatly fold the edges, mitre the corners and stitch into place. 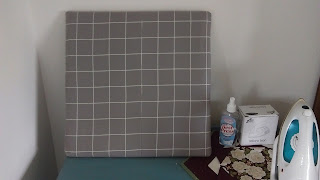 and I have to say it works really well. Whoo hoo!!!
So what else have I been doing, well I'm delighted to say that I have had several finishes.
First up I completed a small Charity Quilt from some of the Orphan blocks donated by the ladies of SVQ, I had 10 baby block panels so using 9 of them I put this together using fabric from the stash and added in some squares of shirting fabric (also in my stash) 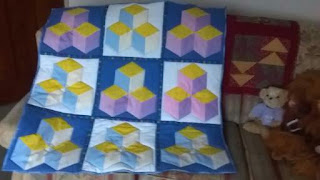 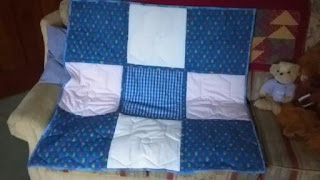 Next I  made a couple of bags from some donated Curtain fabric, it seemed like an easy pattern but I think there were some instructions missing in the magazine article, anyhow I got it completely wrong somewhere. Faced with taking it all apart or starting again I put it to one side and re-cut all the pieces...then didn't have enough of the fabric I really liked as the contrast and handles so I took the original apart worked out what was wrong and remade it (correctly this time!) 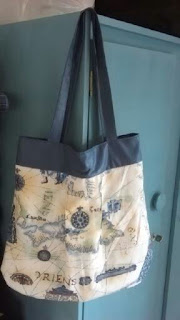 so what to do with all the other bits that I cut? Well I made a second bag which is slightly smaller than the first one (as you do!) They both look a bit pale here as the pictures were taken late in the day, the smaller one will make an ideal knitting project bag. 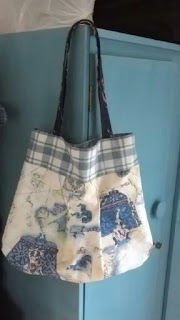 Next I needed a couple of doorstops, we installed some new (very expensive) storage type heaters during the build and the one in the lounge is behind a cupboard door and the one in here is also behind the door, both doors swing back and hit the heaters, hence doorstops! I found a pattern in a magazine for a basic 'pyramid' shaped one and then for the sewing room I found a cute pattern in 'Half Yard Heaven' written by Debbie Shore which I received in the CTQ Secret Santa. So let me introduce you too Mildred and Maud. 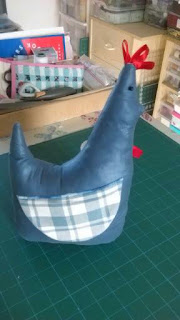 This is Mildred, who unfortunately was a little too small so I made another pattern quite a bit larger and this is Maud 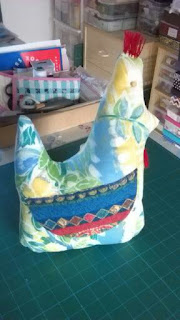 again I used some curtain fabric (I have lots in the stash that has been there for years (after it was donated by a friend) why can I never say NO to offers of fabric????.
Severn Valley Quilters put on a small display of work at Thornbury Arts Festival after they asked us to return (we didn't take part last year!) so here is a taste of what we showed. 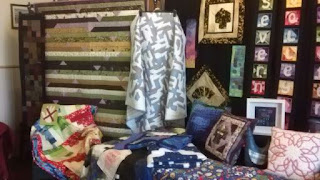 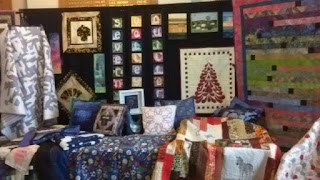 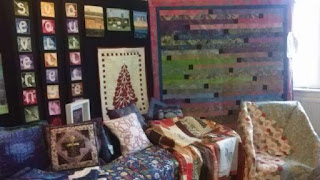 Last but by no means least I have been knitting, this time 3 little jackets I was asked to make by a friend who can't knit. 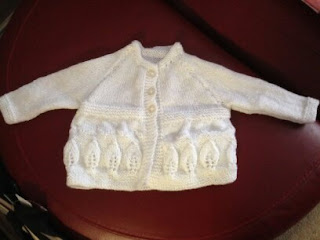 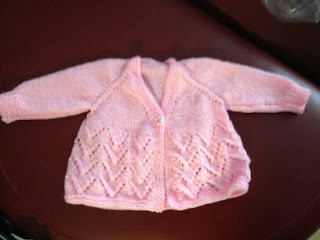 this Green one is the same style as the one above but a different pattern. 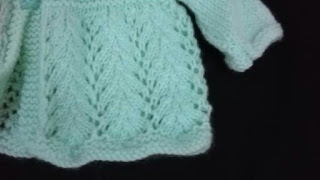 Tonight is Severn Valley's meeting when we will hear a talk entitled 'Unfolding Story' by Stephanie Crawford which is intriguing me! so I'm off to get my tea before setting off to the meeting.
Bye for now hopefully I ll be back soon.
Lxx

Its just as I imagined it would be!

The big build is finally over! Well actually it has been since January when I declared I was moving in! Since then and under the guidance of my good friend Lisa, a long round of painting furniture began, I cleaned, sanded (several times!) and chalk painted (2 coats!) a chest of drawers, a small cabinet and a wardrobe (PHEWW!!!) and I have to say I am pleased with the effect.  As the title suggests my 'STUDIO' is exactly as I thought it would be. So join me on the grand tour...
As you approach the room I have this cute little sign on the door (courtesy of DD at Christmas) 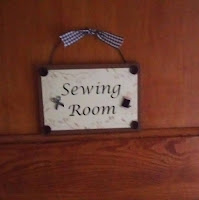 then as you enter, you can see across to one of the storage areas which is in front of the sewing table as I sit at the machine. Its here I store things like threads- of all kinds, rulers and cutting mats, the tall drawer unit houses kits, trimmings, fastenings & zips, plus Vilene, bond-a-web and freezer paper rolls. 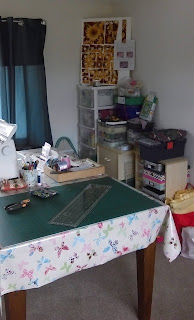 Next is the view from my 'cozy corner' showing the opposite wall. 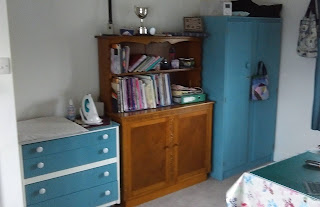 plenty of storage here too, fabric in the chest of drawers, waddings, felt, and other craft stuff in the big cupboard (previously a wardrobe and wonderfully adapted with extra shelves by DH!!). The top of the chest of drawers works well as my ironing surface, which is basically a very large cake-board with a toweling cover, lit on darker days/evenings by a daylight lamp on top of the dresser. I decided not to keep the ironing board up here, as most of the time I will be stitching smaller things - i.e. blocks and small projects, and if I have the need to iron larger pieces then it won't be hard to bring the ironing board back in for a while. The base of the dresser houses more of the stash, while the top is my book case and a display area for some 'special' bits and pieces.

Next looking across from the large cupboard towards the cozy area. This is all kitted out with a comfy chair, it has good light from the window, and a view of the back garden, an angled daylight lamp on the windowsill brightens things up for the darker evenings, with of course a quilt to keep my knees cozy, plus the little cabinet holds the radio and makes a good place to stand the inevitable cuppa and Biccys and there's space in the recess/cupboard for the current hand sewn project plus a few odds and ends. The windowsill also displays a collection of smaller bits and pieces which I have collected over time or have had gifted to me. 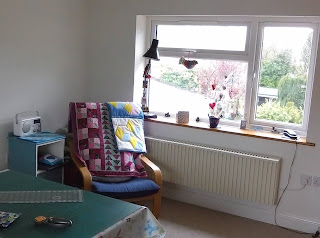 Last but not least is the business part of the room where I sit and sew, from here I have a view of the road at the front of the house so I can see if visitors arrive (and keep a nosy eye on the neighbours and passers by! LOL) 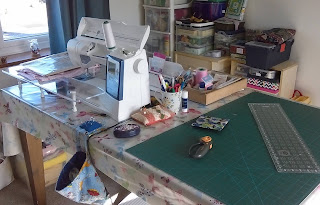 I still have to cover a large heavy duty board which is designated to be my design wall, (which is currently being stored in the garage) this is going to be a two person job so a 'quilty' friend is coming over to help with that soon (Thanks Lisa! X) This will stand against the wall between the storage corner and my comfy chair. I decided not to have it fixed in position, in case I want to move it for any reason.
That concludes the tour, I do hope you enjoyed it, now I'm off to sew - somehow this new space has given my inspiration a wonderful boost and I sew most days when I am home.
I'll try to be back soon with a round up of things made/completed since my previous post.
Lxx