7th September 2015 Today is a very important day, its the day my darling little Grandaughter STARTED SCHOOL!!!!!
Now where was I? Oh yes! catching up on recent events. I spent a very productive day during some wet and gloomy weather sitting in the conservatory hand stitching, as you can see in this view from the window it was very wet 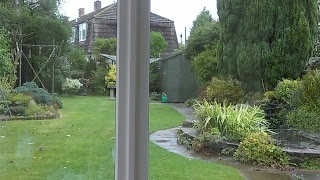 I decided to work on my challenge piece for Severn Valley Quilters, each year we have a 'Chairman's Challenge' and my final choice was set as I retired from the committee in January, as It was my last challenge I felt it would be alright to enter this time, I had already made a start by doing some work on the sewing machine.. and next comes some hand sewing... 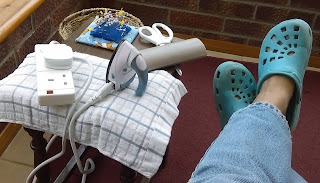 Of course I can't tell you what I am doing but all will be revealed at the end of the month, so this is all I can show you for now!
On 20th August I joined a walk around our local Castle  (and here go to Historical Accounts) grounds led by trustees of the Museum, I have done a couple of other walks with them and they are always very good fun with lots of interesting, previously unknown (to me) history about the town. I took some pictures to show you despite the rather damp weather, (where they failed to be of use I have resorted to Google) 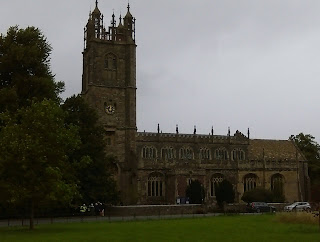 This is St Mary's Church where my Parents were married and I was baptized. It stands directly in front of the castle (which I forgot to say is now a Hotel) but is not connected to or with the castle in any way, the present day entrance is via a drive to the left of the church, past a 'modern' (in castle terms) gate
Entering the grounds we walked along a rough track to look at part of the original walls from the outside, once inside the grounds a few of us braved the by now very wet bushes and trees to visit the Stafford      Graveyard (I'll go back and do that on a dry day now I know it's there!) then we headed in the direction of the castle past the Vineyards, (now producing its own 'Thornbury Castle Wine) and down toward the original entrance.
These 2 archways set into the walls formed the original main and only entrance into the castle, from the other side there is a wonderful view of the Severn Valley all the way to the River Severn, land which was owned by the Duke of Stafford, who bought up all the surrounding land to make 3 huge deer parks, thus you would have to arrive via the river and could be seen approaching from any direction. Between these two walls was the Garrison, to the left there was double story accommodation blocks for soldiers and to the right Officers quarters, where there is evidence of  the 2 floors, with obvious fireplaces, (seems to me the officers had the better bargain!) You can still see where 2 Portcullis's (inner & outer) would have hung and the pillars for 2 very large iron reinforced doors are still there. 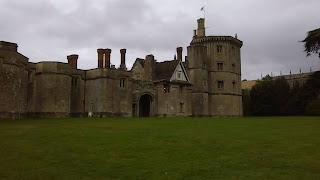 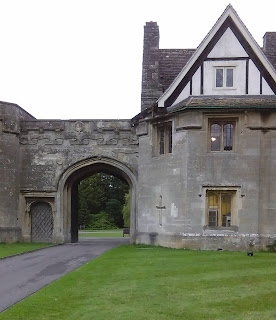 This is the other end, (where some previous owner added this much later cottage, though no one knows why!) the original gatekeepers apartments are on the left hand side of this entrance archway which again would have had a portcullis and an iron/oak door. (the walls continued on the left had side - but were just walls!) Passing through here we came into the inner courtyard, (by this time it was raining very hard and my pictures are not good enough to use, so I have resorted to more Google images!)

Once in here you are surrounded by buildings on 3 sides, the entrance to the castle itself is shown here, (the very small door in the corner by the shrubs!) the buildings opposite this were kitchens of which there were 3 in total,
these are now restored and are used as function rooms for weddings etc. The Duke and Duchess's food was always prepared in its own kitchen (right end) by their personal cooks, and apparently food was served 3 time daily to 100 people including servants! On the roof tops are some beautiful chimneys (reputed to be architecturally better than those at Hampton Court)
Continuing around the end of the main building to the right we were in what is now a Garden used by the guests. This view of the Castle is my favorite, and, according to our guide, these windows are very rare. 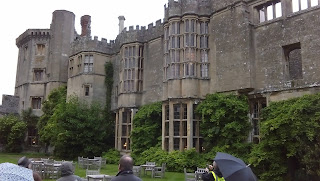 Dated around the mid 1500's they are the only examples of curved glass anywhere in England, the only place where this technique had been perfected at this date was Italy, so The Duke either had them made in Italy and  imported or brought in Italian glass makers to produce them on site. To the right you can see some still derelict parts of the buildings.
Finally we visited another of the gardens a slightly more private affair which would have been used by the ladies of the house, where holes for the bee-boles  (small straw Bee hives) are still obvious in the walls.
These gardens must have been very pleasant to sit in as they would have been perfumed by flowers and aromatic herbs and there must have been some very happy bees too! This was the end of the walk and the party broke up to return home. All in all a very fascinating 2 hours despite the damp weather.
DD goes into hospital this week for some surgery so I will be doing some duties there for a few days, but in my next post I will have some news to share that involves some Silverware!!! so watch this space.
Bye all
LX

Posted by Lorraine at 16:17 No comments:

While Iv'e been Gone Part 2

So what else happened in August, well the outside of the big build got pushed a little further, our builder came over and got most of the little roof over the garage done, the rough cast had been done and the windows were cleaned (well they said they were clean but I would dispute this!!!) 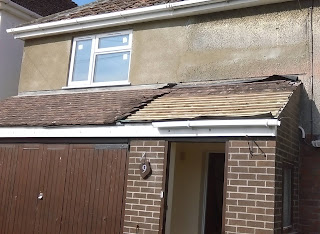 This was the point at which the lead flashing ran out and DH started to suffer with his sore neck so for the next 3 weeks nothing got done as the builder was away on holiday and DH was feeling very sorry for himself.
I mentioned hand sewing last time, the adorable Ted was coming to stay while DD & Co went away in their tent for a few days, staying near Oxwich Bay and managing to pick a really good week-end, so a good time was had by all. While Mr T is here I find it difficult to sew upstairs as he insists on sitting right behind my 'wheelie chair' which means I keep running him over! So instead I planned lots of hand sewing. I managed to get the binding machined on the little quilt that I told you about in my post on 27th July before he arrived and spent several happy hours in the conservatory with my feet up while hand stitching the back down. I found just the right red checkered fabric for the binding 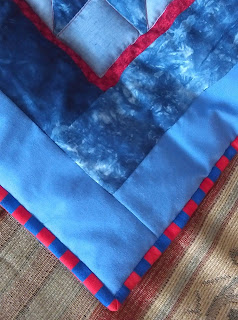 and here is the finished quilt, modeled by my Hair Bear Bunch! 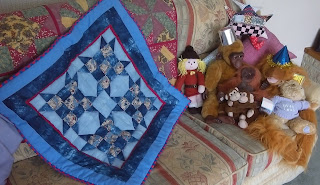 I  then decided to work on the Seed Heads kit bought from Jane Davies, and started in May, I have really enjoyed it, here is a close up of the top part, the instructions said to add a small piece of sheer fabric under each of the 'heads' embroidering over the top 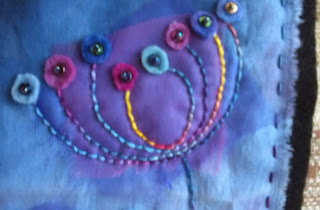 and this is the other end I decided to use 2 small strips of the sheer fabric across this part of the piece. Once the stitching was done the felt circles were added to be held in place by some french knots but I found some seed beads that I liked better. 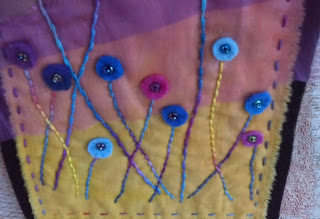 I have been doing some knitting too (of course!) my main project being a blanket, this is 1 of 2 to be made before the New Year as I have 2 friends who are expecting around the same time. I'm using the 4ply pattern that I used last year, and a cone of pretty lemon yarn which I've had laying around (not literally of course) for some years.

I would have finished this by now if I had not spotted a mistake in the border about 5" up, after I had knitted 11" of the 22" required. I have now managed 18", so another week should see it done. I only knit this in the mornings (or if I'm on my own) as I find I like peace & quiet to concentrate on the pattern, which although it's only a 12 row pattern, involves lots of counting. I made a beanie hat while traveling on the bus during a day trip to Lady Sew and Sew back in July, and on the trip to the N.E.C I knitted a preemie cardigan. I am also trying to size up the pattern to use D.K. yarn instead of 4ply which so far is going quite well, much to my surprise as I have not tried this type of 'experiment' before.
Well I may not be back till next week with Part 3 as I have Little H arriving tomorrow for a sleepover this weekend, her last before starting school on Monday (where did those 4 years go? :-((( ) we are going to be quite busy as its the village Flower Show on Saturday and we are both going to enter a few things. I am entering 3 of the cookery classes as well as the craft and H is doing 6 classes. I'll let you know how we get on.
Well that's it for now
Night night.
Lx

Posted by Lorraine at 22:29 No comments: