I Can't Believe how long its been!!!

Hello Dear Readers
Are you still there or have you given up on me completely after all this time?
I guess there is no easy way to catch you all up on my news so I'll just give you a quick run through of the last 6 months.
If you can remember way back in June I had just returned from my little holiday in North Wales, since then I have not really achieved much in the way of large quilting projects but I have been sewing small projects such as the textile book idea and some other embroidery plus lots of knitting.
JULY:
Little H came for a sleepover and together we attended Thornbury Carnival H had never been to a carnival before but having learned it was a parade of people all dressed up she brought her Queen Elsa outfit to wear including a Tiara. We went into town on the bus as parking is very limited on these days and arriving early we found a good vantage point to watch the Cavalcade/Parade. There were lots of entries in the parade and several bands to keep us all clapping and before you knew it H was up dancing at the side of the street much to the delight of the surrounding spectators, after the parade all that dancing gave her an appetite so off we went to find some lunch.
DD arrived to pick H up the next day and there was to be a big surprise for her, as they left early to collect a new Kitten, DD has wanted a cat since losing her previous one too old age and she had decided to have this little cutie, named by H as Juno she is a Maine Coon/ Rag Doll cross and is very 'Floofy' to quote H! 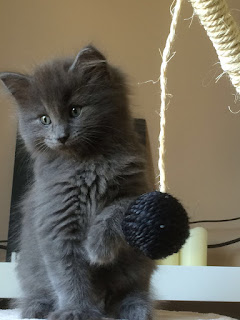 I went on another History walk with a group from the Museum during which I discovered that there is a slave woman buried in St Mary's church yard, I found this fact to be very interesting as we have a slave (Eliza Elizabeth Snipe) buried here in our village church. I know this to be true having seen the grave many years ago.
After some research during which I visited the grave, I was able to establish that Eliza E Snipe was a devoted servant to a local family for over 47 years having come back with them from Jamaica.
AUGUST:
An important quilt project was begun as I had decided to make Mum a quilt for her Birthday in September, I had the fabric all ready including backing and wadding and as it was to be a strippy Jelly Roll quilt it did not take me long to put it all together. 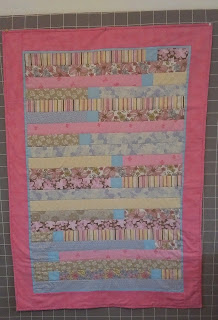 Lisa and I took the chance of a day out to visit Barrington Court in Somerset. 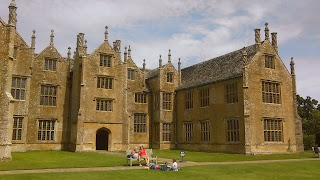 we had a wonderful day out in glorious sunshine and to round it all off there is a Patchwork shop there too!
Of course being August we also visited the Festival of Quilts at the N.E.C.
SEPTEMBER:
The 4th September was the day of my Mum's 90th birthday, this was preceded by lots of secretive planning on my part, sending out invites to friends and family, organizing a cake and the like. Early that morning I went round and decorated the railings outside her window, 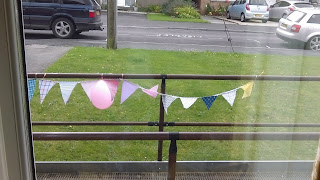 on my return I also decorated our garden with more bunting and balloons, before going back to collect her in time for Sunday lunch. Her biggest surprise was the arrival of my cousin all the way from Norfolk, a family member Mum has always been very fond of. Later there were more surprises as her guests arrived and despite overcast skies it was warm enough to sit in the garden where Mum 'held court' all afternoon with much ceremony being carried out with the cutting of the cake. 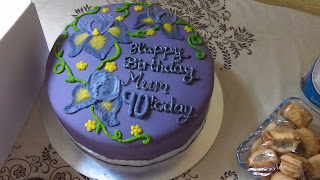 Thankfully she was delighted with her quilt BUT is refusing to use it as she 'doesn't want to spoil it'. BLESS HER!
OCTOBER.
This month was the deadline for return of the Chairman's Challenge at Severn Valley Quilters, the theme set was Black, White and one other colour, after much deliberation and lots of ideas gleaned from Pinterest I decided on an Origami Candle mat from a Blog entitled Fiery Pheonix. I already had some fabrics in suitable colours and this was my finished mat. 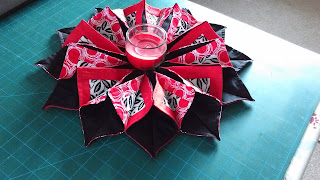 I attended an Amigurumi crochet lesson with Lisa at the Wool Stop and I have a crochet Beef burger 'under construction' as I speak. I also started some very secret Knitting for a project I had in mind.
NOVEMBER:
I attended a workshop with SVQ to make a cushion cover entitled 'Set in Stone'. Heather and Sheila had previously attended a workshop with Lynne Edwards and she had very generously given them permission to teach this for a small group of us from SVQ. 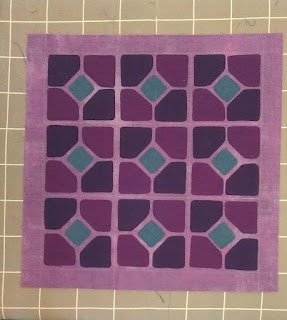 this was completed with machine Buttonhole stitching around all the shapes and straight stitching between the squares,  There was also a lot more 'secret knitting'.
DECEMBER:
Finally it was time for 'the big reveal' of all this secret knitting, which was a yarn bombing event. Back in October I came up with a crazy idea to Yarn Bomb my local shops, I followed all the rules by asking permission from all the shop owners (none of whom took the trouble to reply I hasten to add!) Taking this silence to mean they had no objections, I set out a 5a.m. on 2nd Dec with my 'tool kit'. It was all planned to coincide with our village Christmas Fair on 3rd Dec and this was the result of all that knitting and crochet.
I  designed and made 40 of these little Christmas trees, 2 of each colour 'pot'. 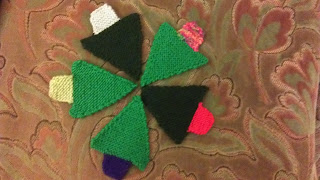 with 2 x 18 feet lengths of i cord to hang them here, on the handrails at each side of the steps 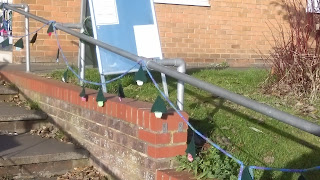 a 6 foot length of garter stitch to wrap round here 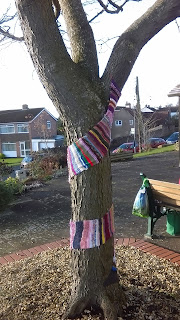 and a large piece of crochet using my recently learned Amigurumi skills for this. 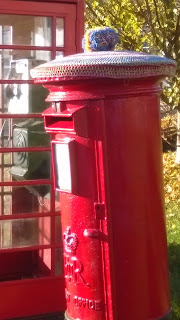 Apparently photos made their way onto Facebook but as I do not 'do' FB I have no idea wether its true or not but going by the comments I overheard at the Fair it was very well recieved . RESULT!!
Finally of course there was Christmas which was a much quieter affair this year, as DD and family went to visit DSIL's parents in Shrewsbury, coming to visit us on the day of DH's birthday on 28th.

Well my dear readers that just about brings my life up to date, I do sincerely hope you are all still around to read about it and I will do my best not to be absent for so long in future.