Here I am again and pleased to tell you that I have improved a great deal. I am not completely recovered, but nowhere as near as bad as the last time I spoke to you. After 6 weeks of misery all that remains are that my ribs still pain a bit, THE COUGH is reluctant to 'let go' and all the inactivity has caused one of my hips to seize up which makes walking difficult but I am getting there.

My crochet nests are completed, I made 9 in total and they will to go off to the vets this week, here are 7 of them... 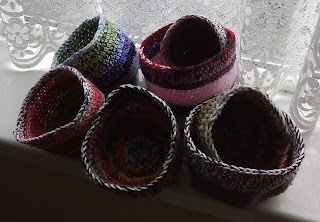 While I have been sitting around, Spring seems to have arrived in the garden, whilst the weather has been grey and gloomy the temperatures are fairly warm hitting 5/7 and even 10 degrees some days. The snowdrops were first to appear around the middle of February closely followed by the crocus's 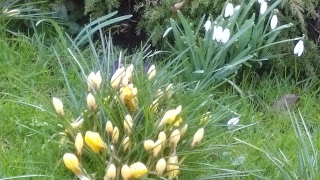 and then the tiny little daffodils appeared and showing their promise of colour. I think these are called 'Tete a Tete' they are about 12" high and have tiny little heads on each stem and I have to admit that although I love all the spring flowers these are a favorite of mine. 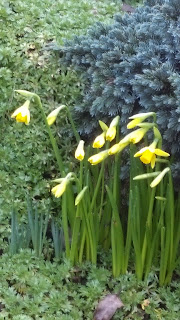 I think they look so pretty against the backdrop of the 'Blue Star' low growing conifer on the large rockery.

then in a few days, more quickly opened up, to show off their pretty faces among the crocus and snowdrops on the small rockery.

I'm still crocheting this time making a large nest with my remaining scraps as Little H requested a 'nest' for her Kitties. While in Disneyland Paris she treated herself to a set of 3 kittens from the film 'Aristocats'. I have to report that they ALL had a really good time in Disneyland and I think they all found their 'Happy Place'. They managed to meet a lot of characters including Pluto, Goofy, Peter Pan Chip n Dale, King Louie (and YES! I am Jealous!) and several Princess's, which of course was the highlight where H was concerned on the list of people to see. It took me a long time to see all the pictures they took.

On Wednesday last I managed to attend the AGM at Severn Valley Quilters and I am once again back on the committee as Chairman. It will be a busy year as we have our Bi-annual Exhibition in February 2018. It was a good meeting and following the business we had a talk from Sandi Lush, Sandi was a member of our group way back when I first joined and it is always a pleasure to see her and see some of her work.

Well that's it for this time, I'm about to put my feet up, watch some TV and do some more 'nest building' for those kitties.

Posted by Lorraine at 15:03 No comments:

Be Careful What You Wish For!!!

Hello Readers,
Things have not been going to well around here for the last 4 weeks, during a couple of weeks in early to mid January I had a very busy and somewhat stressful time, with lots of jobs and appointments for Mum, until at one point I stated emphatically to anyone who would listen, "That I would give anything to have 48 hours to just sit and do nothing" which brings me to the title of this post.

On January 21st it was Clock Tower Quilters meeting, I attended as usual but did not achieve much as there was a lot of admin to take care of being the start of our new year. Throughout the day I had not felt quite right but put it down to tiredness. Later that evening I decided it was because I was going down with a cold kindly brought into the house by DH about a week before.

When I got up on Sunday morning I felt really ill, but no cold! Despite this I managed to fetch Mum, plus cook and clear up Lunch. Taking Mum home a bit early I came back and fell into bed. Over the next 2 weeks I started to feel worse and worse (do I hear violins?) and by the following weekend I was at my worst, hardly able to do anything except the most urgent tasks for Mum, then the cough started.
On 27th I managed to attend a family meal to celebrate DH and DS's birthdays. However the cough continued to worsen and my muscles were beginning to 'complain'. In pure desperation I agreed with DH that I should visit the Doctor. Well my friends if I had had the energy I would have fallen off the surgery chair when after an examination the doctor announced that my oxygen levels were 'a bit low' and he would listen to my chest (my back actually!) and announced that I had Pneumonia in my left lung! Prescribing 7 days of antibiotics and with instructions to ' rest, stay in the warm, drink plenty' etc, home I came and I didn't leave the house again until last Friday.

Almost 2 weeks after finishing the pills! I didn't feel any better, the coughing was even worse and came with an excruciating pain under my ribs, moving from room to room made me very breathless and going upstairs was 'an art form.' Calling the Dr again I was given a message from the duty Dr that there was not really any more they could do, and that the cough would take up to 6 weeks to clear, but if I started to feel breathless (HELLO!!) they would see me! So off I went again, after another examination it was announced that my left lung was now 'full of infection and that I also have Pluerasy' (Sp), so it seems a good job I had insisted on going.
I am now on some very aggressive antibiotics which come with some nasty common side effects (so far so good, but my fingers are crossed I don't get any!) So the moral of this story is I WILL be very careful what I wish for in future!
Anyways that's got that off my chest figuratively speaking, so what else has been going on, before all the above and since Christmas I have been knitting and produced these... 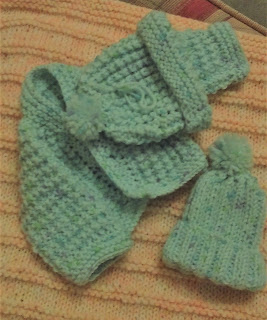 A preemy cardi and 2 hats to match in pale green flecked DK. (note to self, I still need to buy buttons!) 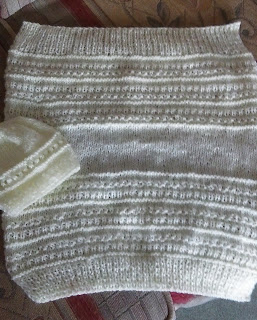 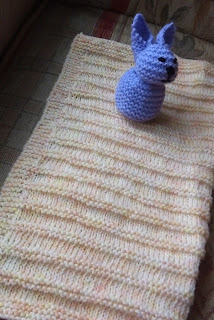 A peach coloured incubator blanket (own design) and a  Lavendar bunny made from a square both in DK.

You may remember my yarn bomb escapade last December, well I washed and dried everything, then spent a couple of evenings un-ravelling the 6' of garter stitch from my yarn bomb tree wrap and ended up with an ENORMOUS ball of yarn that was all different weights and colours knotted together, I didn't know what I would use it for but was sure something would occur. Then I had a brain wave, my old brown furry 1970's Pouffe was well past it's sell by date so using the post box 'hat' I unpicked it to a point it would fit the top of the pouffe then crocheted sides till it covered the whole thing. 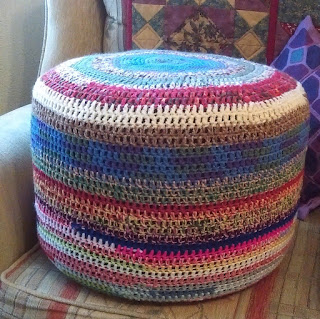 The pouffe now looks like this a crochet 'amigurumi style' cover, the top is worked in double crochet and for the sides I changed to trebles, its a bit on the colourfull side but it's got a new lease of life.

Yesterday my 2 grand-pets arrived to stay for a week while DD and family go off to Disneyland Paris, this has been a BIG HUGE SECRET from little H since last October, since then they have managed to secretly get DSIL a passport, and then one for H explaining that everyone has to have one when they are five. Due to some mix ups at the passport office H's only arrived last Tuesday (phew!!) So on Wednesday evening she was asked where she would like to go for a 1/2 term treat, first she chose Jumptastic (a local Trampolining centre), when encouraged to choose something better, she said a safari park then, when asked to choose again she very tentatively said... Disneyland??? On hearing that was in fact where they were going she ran and jumped all round the kitchen shouting YES! YES! and Grandma got a very excited phone call to tell me all about it. They are on a train to London as I speak and will travel to Paris via Eurostar tomorrow. 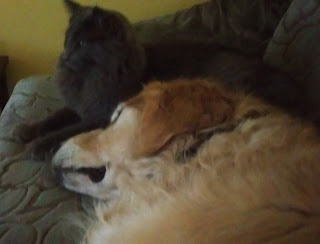 As you can see the pets are all settled in, here they are this morning sharing the sofa. Two days on the new antibiotics they must have had some effect, as while I have been doing 3 weeks of sitting and doing nothing, this morning, finally, I started to feel a bit better in myself (though still coughing fit to burst) and get a bit bored (YAY!) After a text and a link from DD a few days ago to say her Veterinary practice are asking for knitted or crochet wildlife 'nests' I decided to see if I could make some. The practice supports a Gloucestershire Wildlife Rescue Centre and they use these to hold abandoned/orphaned baby birds, hedgehogs and the like. (everyone say AWWW!)

I downloaded the patterns which are from America, so have a slightly different terminology i.e. for single crochet read double crochet. I found 2 - 3 strands of DK was simply too thick to work with but this is what I have achieved so far, the one on the right will have a 3" base, and the completed one has a 6" base, they accept any size between these 2 measurements, but they must be closely worked, have flat bases and sides that 'stand up' and are 2"- 3" deep. After several 'prototypes' I have found I needed to adjust the instructions slightly to get the base to stay flat, I'm using 1 strand of  DK and 1 strand of 4 ply with a 4mm crochet hook to achieve that.  Again I'm using the un-ravelled yarn from the yarn bomb, so lots of colours (and knots).
Once again that brings you all up to date from here, next Saturday will be Clock Tower again and I am just hoping I'm well enough to go as we have Mark Pickles from Husqvarna Studio Bath coming along to service all our Machines, and all 3 of mine need doing plus I'm opening up as Sheila is out of action following a knee op yesterday.
Will try to keep you posted.
TTFN
Lx
Posted by Lorraine at 18:06 No comments: