As you will have read last time I was planning to try and post more regularly on here but, my Dear Readers life as they say has other plans.

After a wonderful Christmas Day with all the family in 'attendance' followed by a 2nd pleasant day on Friday 28th Dec.when my DH hit the big 80 (we enjoyed a small celebration here at home) things suddenly went downhill very fast.

Early hours of Saturday 29th December my Dear Mum was taken to hospital by ambulance following severe 'breathing difficulties' around midnight. By 7.30.a.m. she and I were given the devastating news that she had suffered a major 'silent heart attack', and although she had survived things were very scary for her (and myself).
However the Dr's seemed hopeful that with the right medication she would be able to go home after a few days. I stayed the rest of the day and left her around 6.30 p.m. Planning to get some sleep and pack a small bag for her, returning on Sunday morning (30th) as early as I could.

At 9.15 a.m. the hospital rang to say she had taken a poorly turn and could I go straight back in ASAP. After a frantic dash I arrived to find she had passed quietly away around 9.30 a.m following another heart attack, I was able to spend some time with her before returning home to speak to the family.
Her whole life had revolved around her family and she idolized her Darling Great Granddaughter, she was active in village life until around 5 years ago and was still a member of The Royal British Legion, and, as recently as June last year she had been delighted to take part in a film about her memories of the war years (she was 13 in 1939) for Gloucestershire Museum Archives. She was always full of laughter, and her health had been robust apart from Osteoporosis and Arthritis (she was working until she was 70!).

And so however much I had thought about the end of her life, it was sudden and not what I expected, At 92 years old she was still able to live alone with minimal help, she was always chirpy bright and in very good health although getting a little frail.
I have to say that I believe this was the way she would have wanted it however devastating it was and still is for all of us. She had a D.N.A.R. in place after talking with her GP and 4 years ago she had planned her Funeral.

And so on the 21st of January we said our final goodbyes. I was heartened to find that the church was full of her friends both old and new to bid her farewell, the service was conducted by Tracey a lay preacher and friend of 30 years. She now lies with her beloved Husband Henry in a double grave at our local church, reunited with both him and their son John. 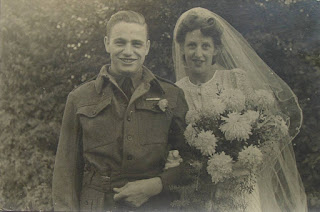 Below is the reading I chose to add to her Funeral service and this is how I will try to  think of her.

They Are Not Dead - Unknown

They are not dead,
Who leave us this great heritage of remembering joy.
They still live in our hearts,
In the happiness we knew, in the dreams we shared.
They still breathe,
In the lingering fragrance, windblown, from their favourite flowers.
They still smile in the moonlight's silver,
And laugh in the sunlight's sparking gold.
They still speak in the echoes of the words we've heard them say again and again.
They still move,
In the rhythm of waving grasses, in the dance of the tossing branches.
They are not dead;
Their memory is warm in our hearts, comfort in our sorrow.
They are not apart from us, but part of us,
For love is eternal,
And those we love shall be with us throughout all eternity.

And so my friends my creative Mojo is listed as 'missing' for the time being, hopefully it will return and I will be back just as soon as I can,
Lorraine.

Posted by Lorraine at 19:06 No comments: