So hot in fact that I have stayed indoors all day and I have sewn! Now, a couple of posts ago I was bemoaning the fact that I seem to have lost my sewing mojo, but for a little while yesterday and today it seems to be back! Since my last post I have started another 'hexie' project - (more on that later) finished the baby cardi I was knitting and sorted out the sizing on the sweater I want to make for DH with a little help from the lovely Pat at Knitter Knatter on Monday evening. Tuesday was spent as usual at DD's to help with her job and yesterday I went off to Thornbury to meet a friend for coffee (well it was tea actually 2 POTS of tea!) Well we had a lot of catching up to do:-))) at the end of July we had some beautiful sunsets and this is the view I get from the workroom or the conservatory.
. 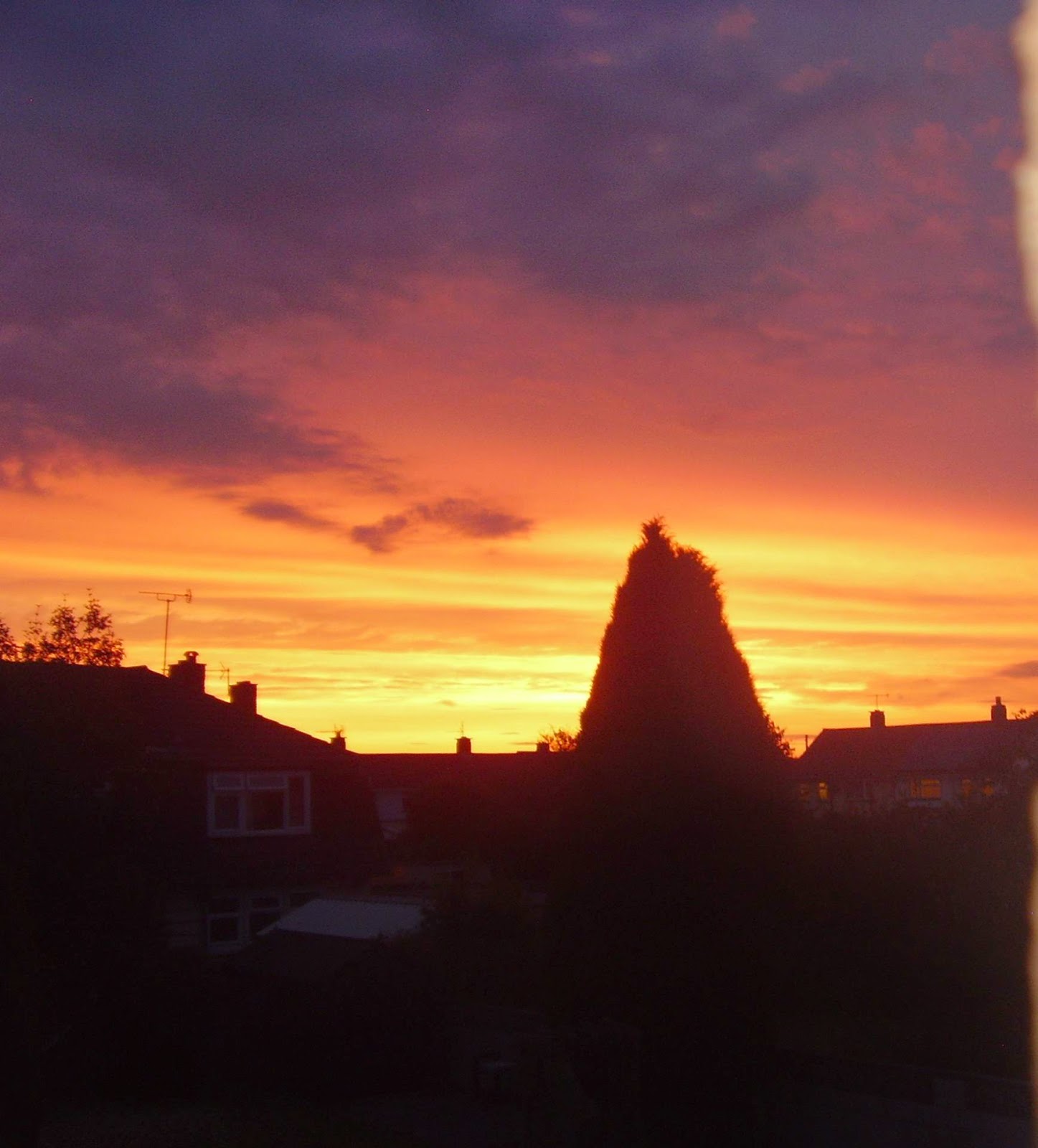 Since the above was written (in late July) it's got COLD COLD COLD and rainy, so lots of time spent in the conservatory doing crafty stuff. To catch you all up this is going to be a picture heavy post so make a coffee and settle in for the long haul folk's.
The July Meeting of Severn Valley was a workshop on tassel making with the lovely Anne, I have done this with her before so decided it was time to make another one, this is the two I made previously 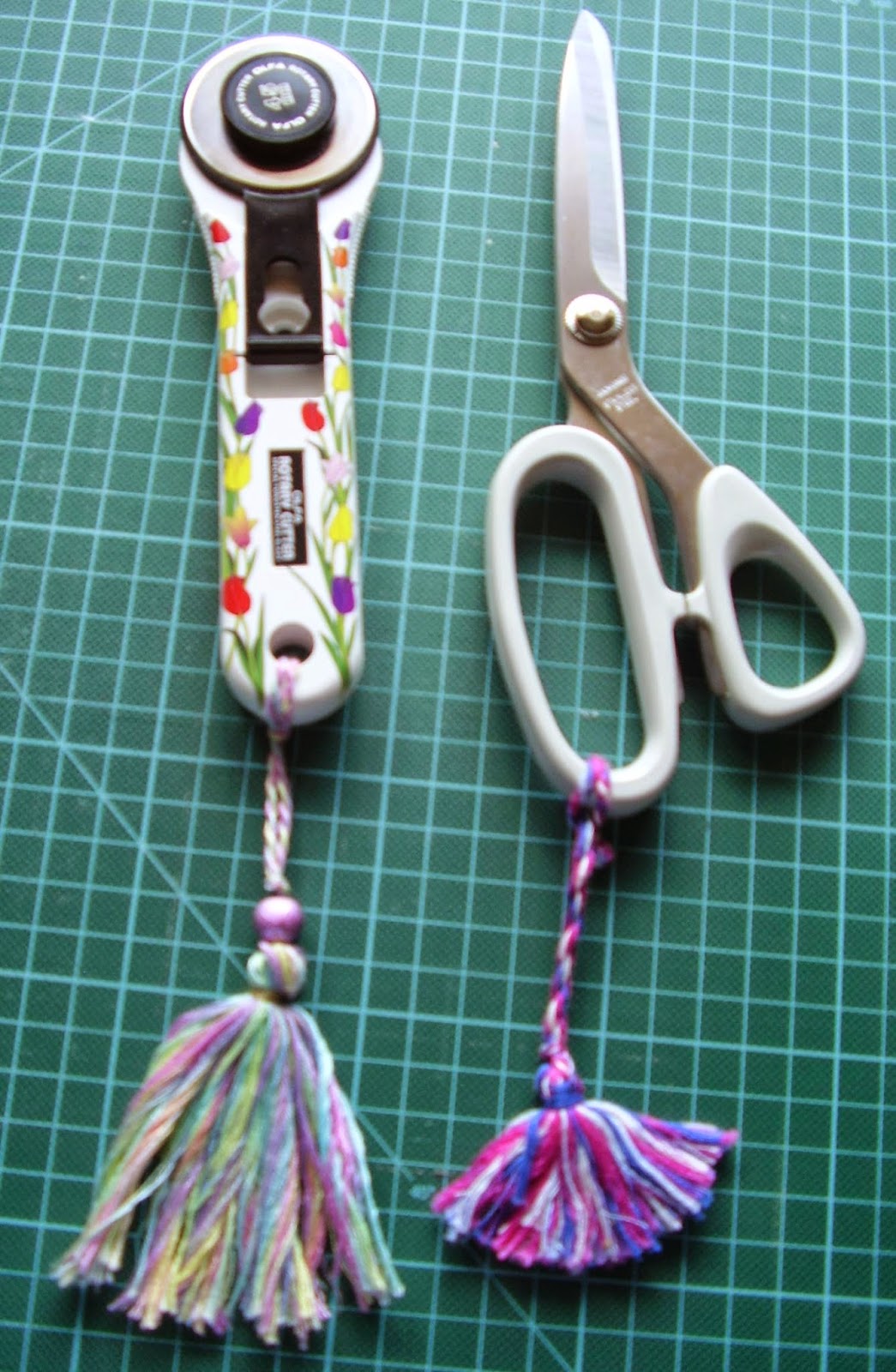 and this is the latest one and each made with just one skein of embroidery thread and a pretty bead, so cheap and cheerful I may make a few to embellish some gifts! 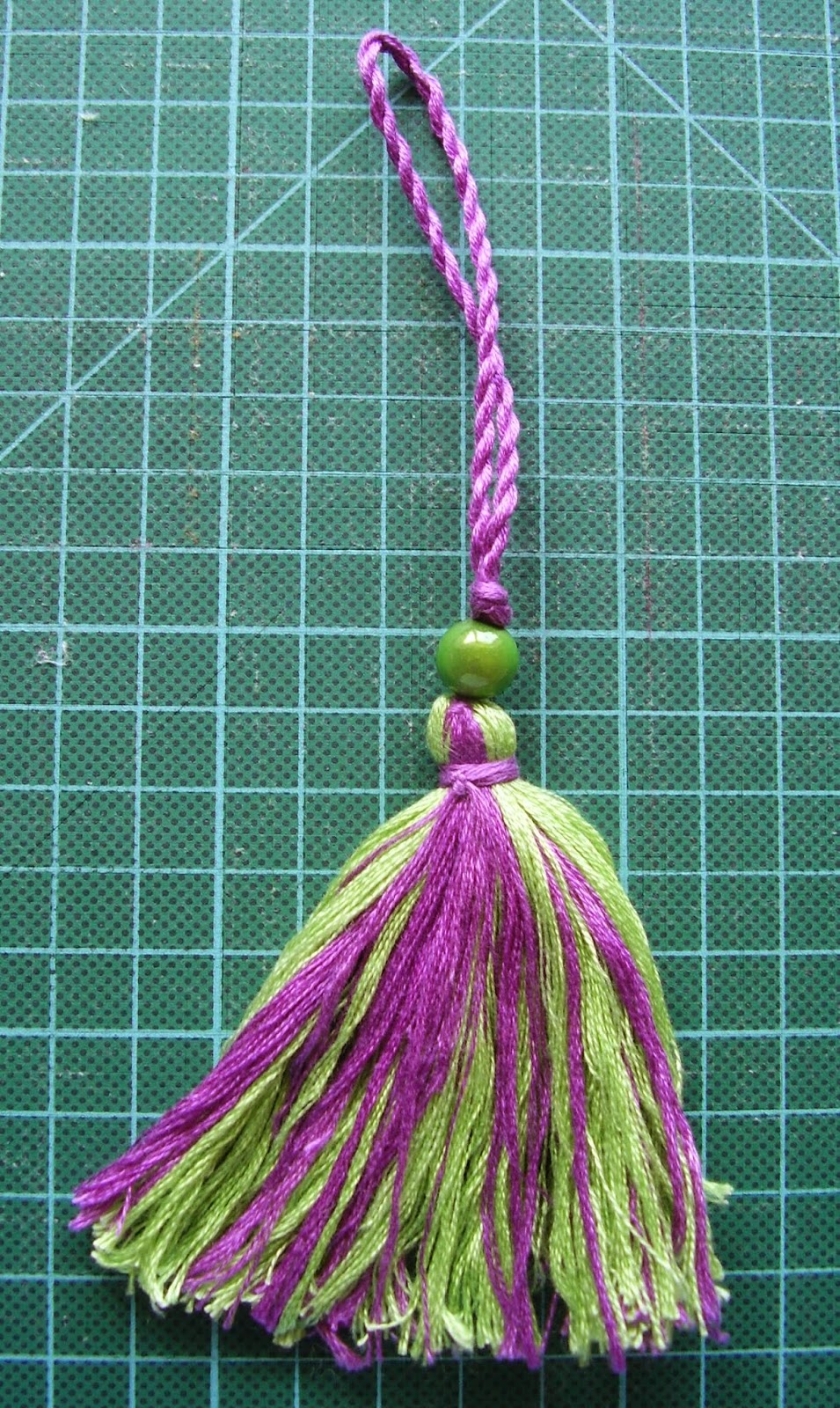 The sweater project for DH is not sorted out despite all Pat's help and several tension squares made to date failed to establish the size needles to use for my 2nd attempt it still came out far too big (for Big read HUGE - 56" chest HUGE:-(). After unpicking, restarting and completing about 10" it still seemed on the large size so more measuring and still HUGE so I took it all out again, I'm now on the 3rd attempt (or is it the 4th  I've lost count!!) This time I'm 2 needle sizes down and knitting tighter, so its watch this space.
On 2nd August It was a sewing day with the girls at Severn Valley and I made some good progress on Hannah's alphabet wall hanging with only two letter squares to go it's time to decide how to set it all out, The following day DD arrived to drop off  DGD who was having a practice sleepover in preparation for DSIL and DD to have a few days away on their own as a belated honeymoon. Despite never having stayed anywhere without Mum & Dad she was a little angel and slept all night, I had promised we would 'do baking' if she behaved and in preparation for that I made her a little pinny which she is very proud of, I found a tutorial on U-tube to get the sizes (and tho she's onnly 3 I'm glad I made the 5-7 year old size she's really shot up of late!) and used fabric bought on my trip to the USA in 2011. The straps are cotton tape with ric rac braid to strengthen them 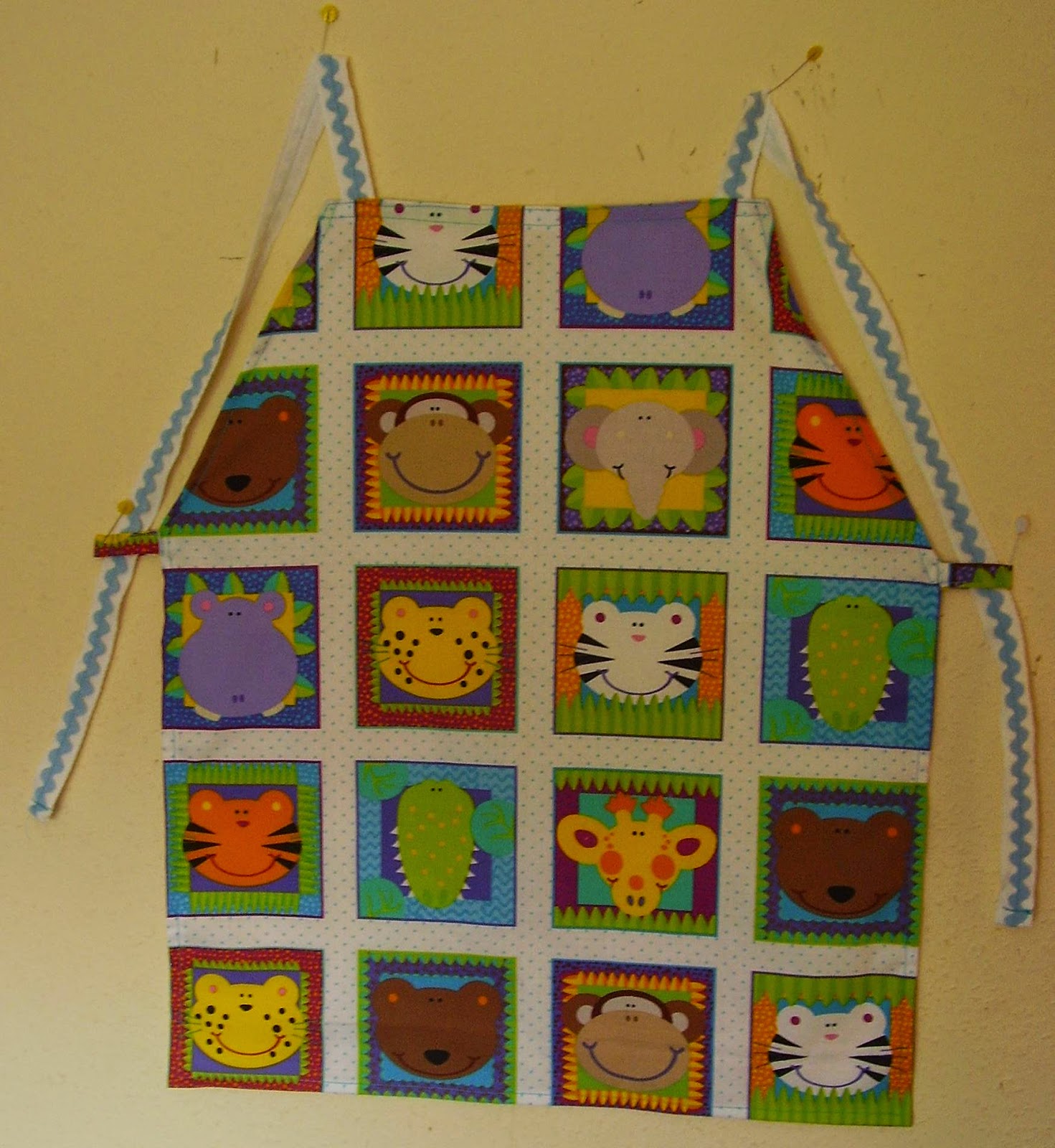 I put tabs at the side to make it adjustable. 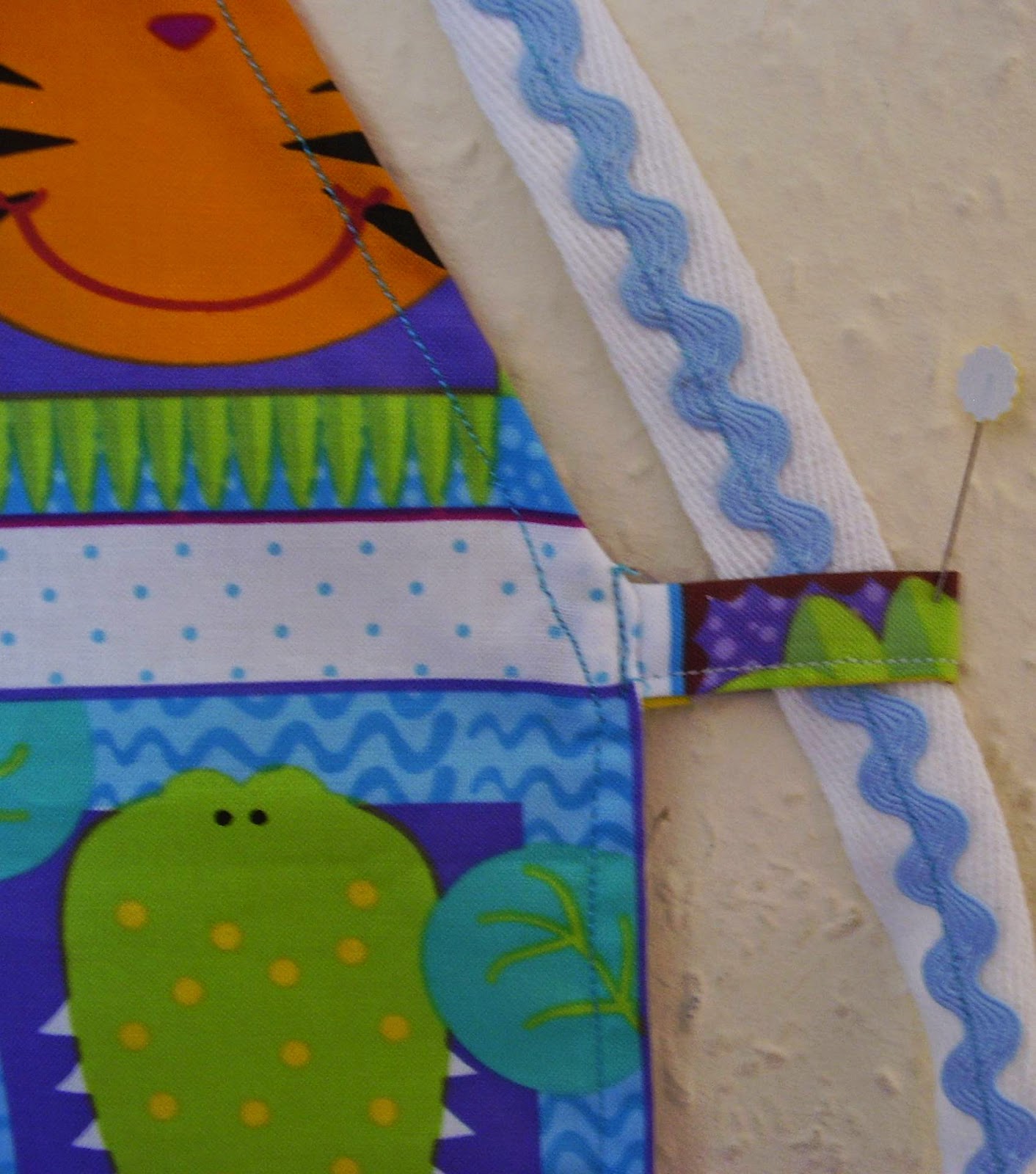 On 9th August I set off by coach to the N.E.C for the Festival of Quilts where I was meeting up with the lovely Laura. I was delighted with the show and took a few pictures of the quilts that caught my eye..of course that had to include a crazy quilt, this one is by Alison Garrett  was made over 5 years and reflected her time spent traveling, it's called 'A Slow quilt' 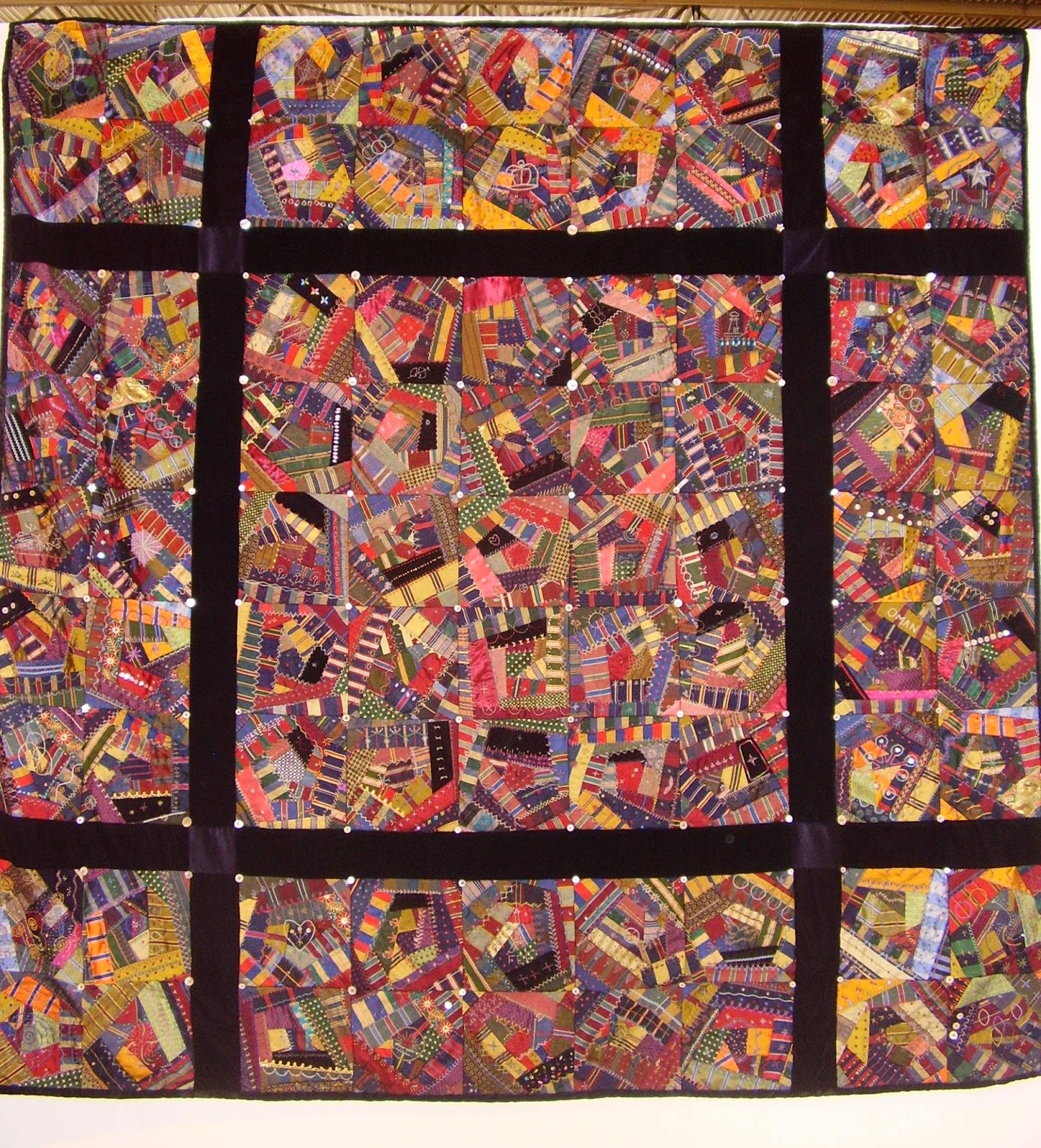 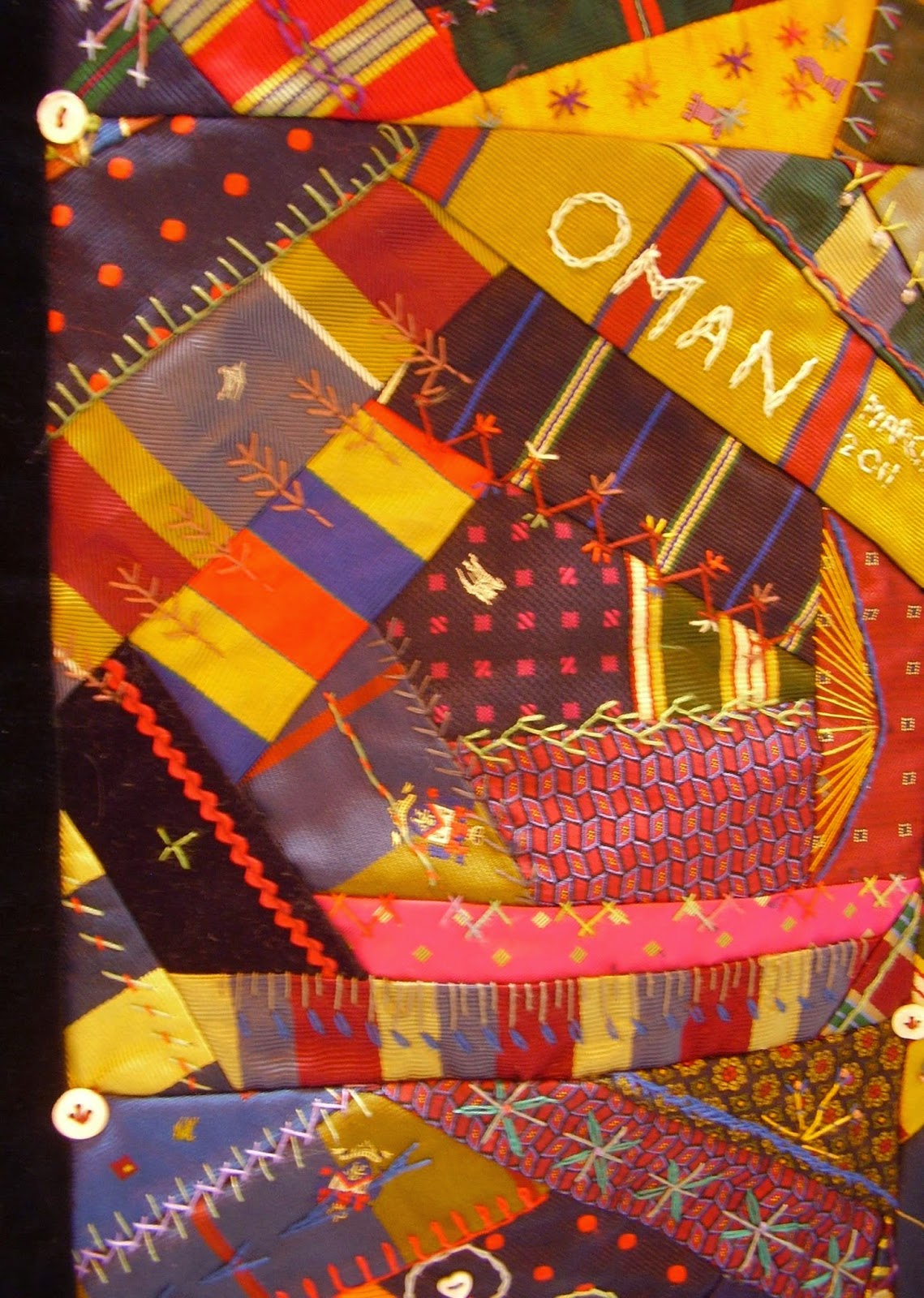 the next 2 are from the 2 Person Category, this one by Carmen Navaro Alonso & Sylvia Gonzales of Spain entitled 'Flowers in the Wind' 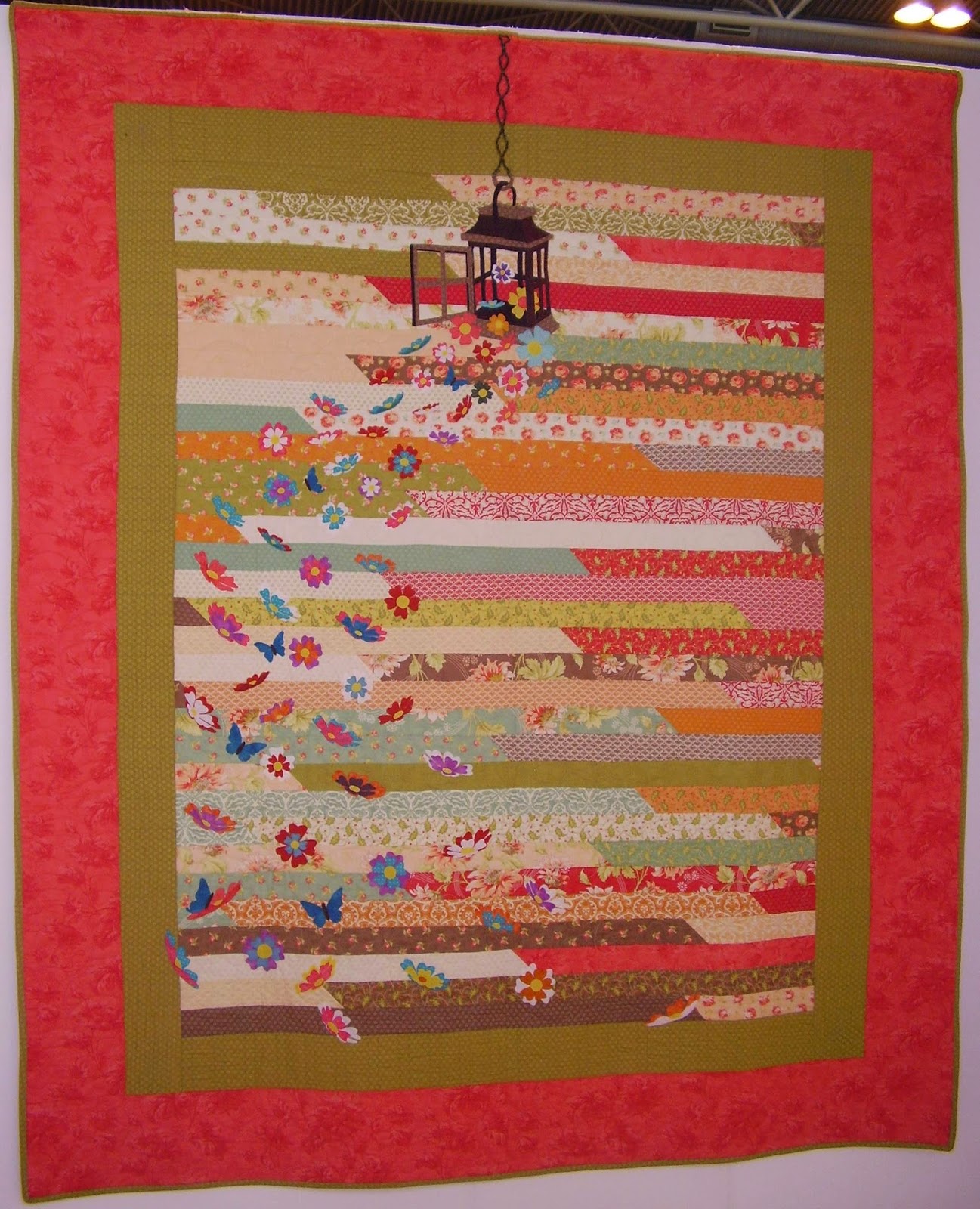 and this one called 'Beneath the Surface' by Sue Roberts & Margaret Owen which really gave a sense of the micro organisms that make up our Oceans. 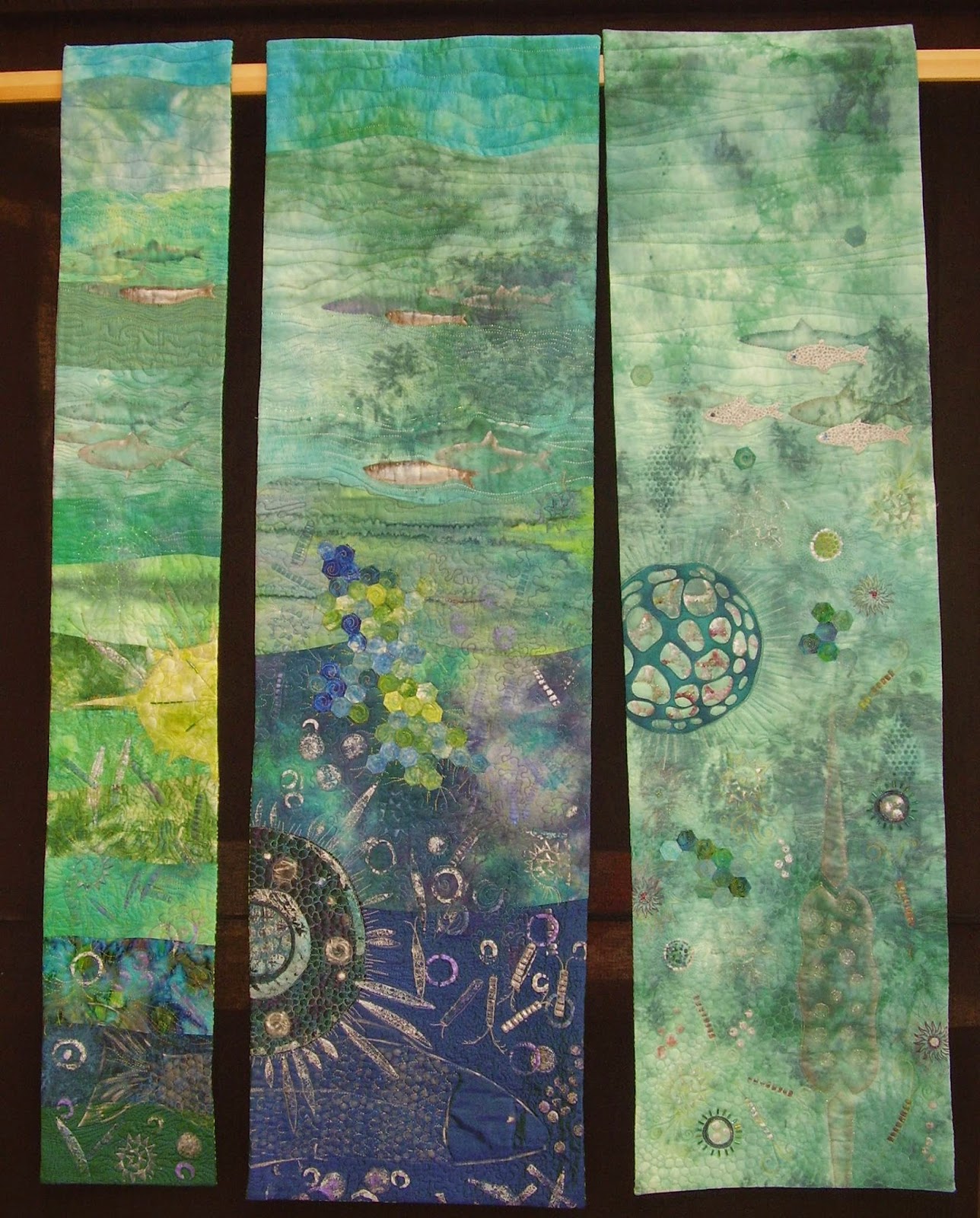 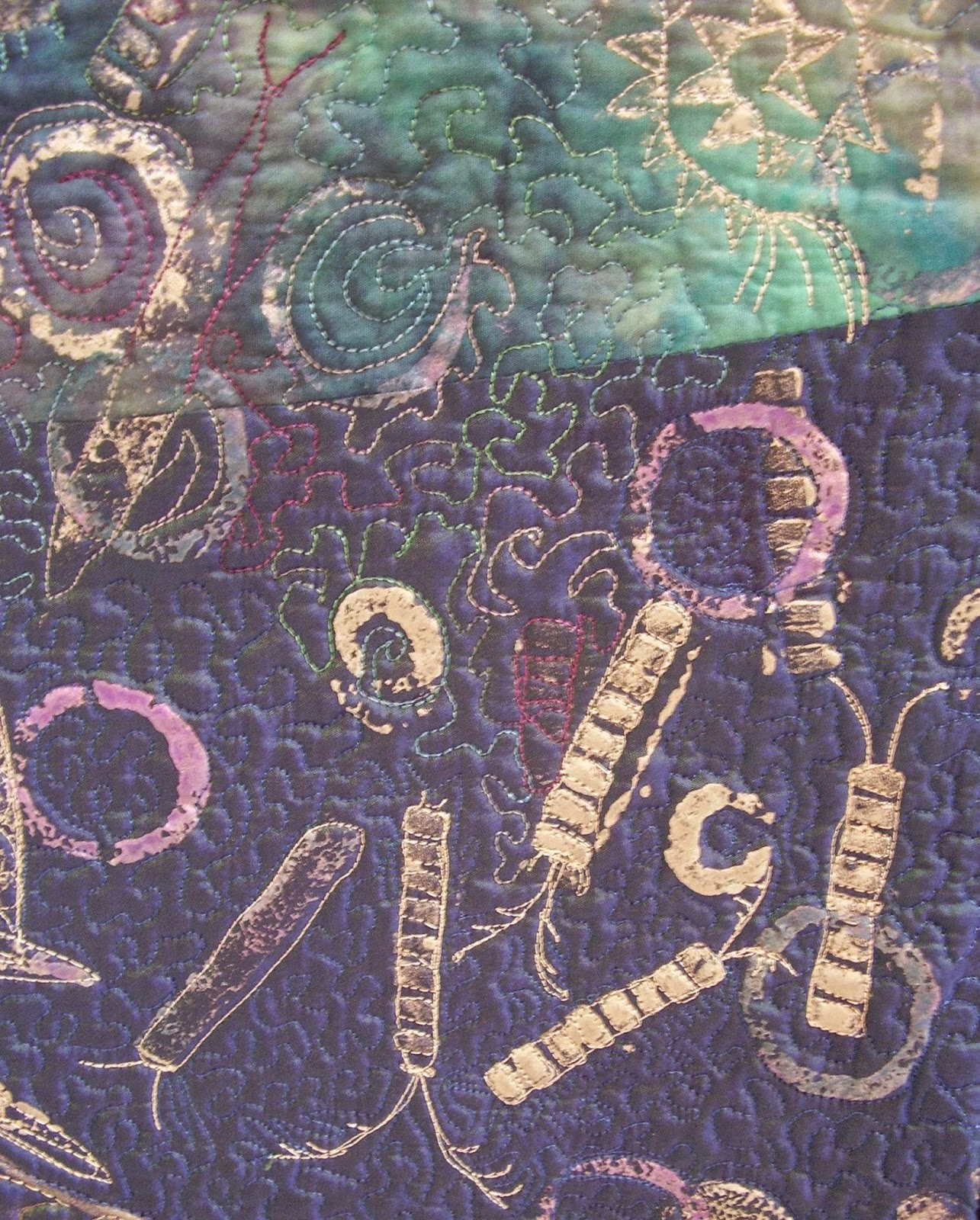 This one had wonderful humor and a sense of fun and seemed to strike a cord with those around while I was taking my pictures.Called 'Les Q ers'. Made by 9 quilters and entered by Marion Barlow 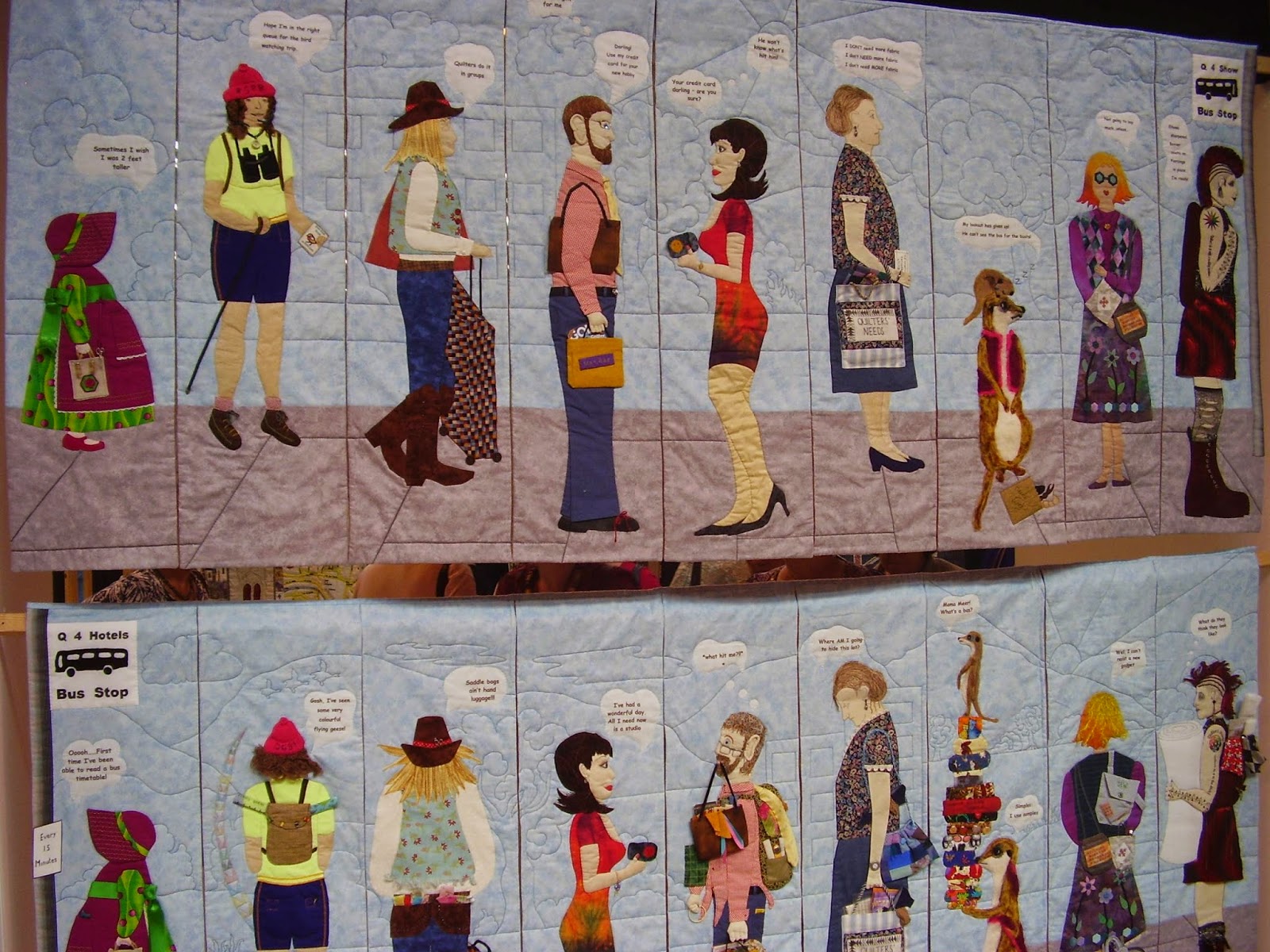 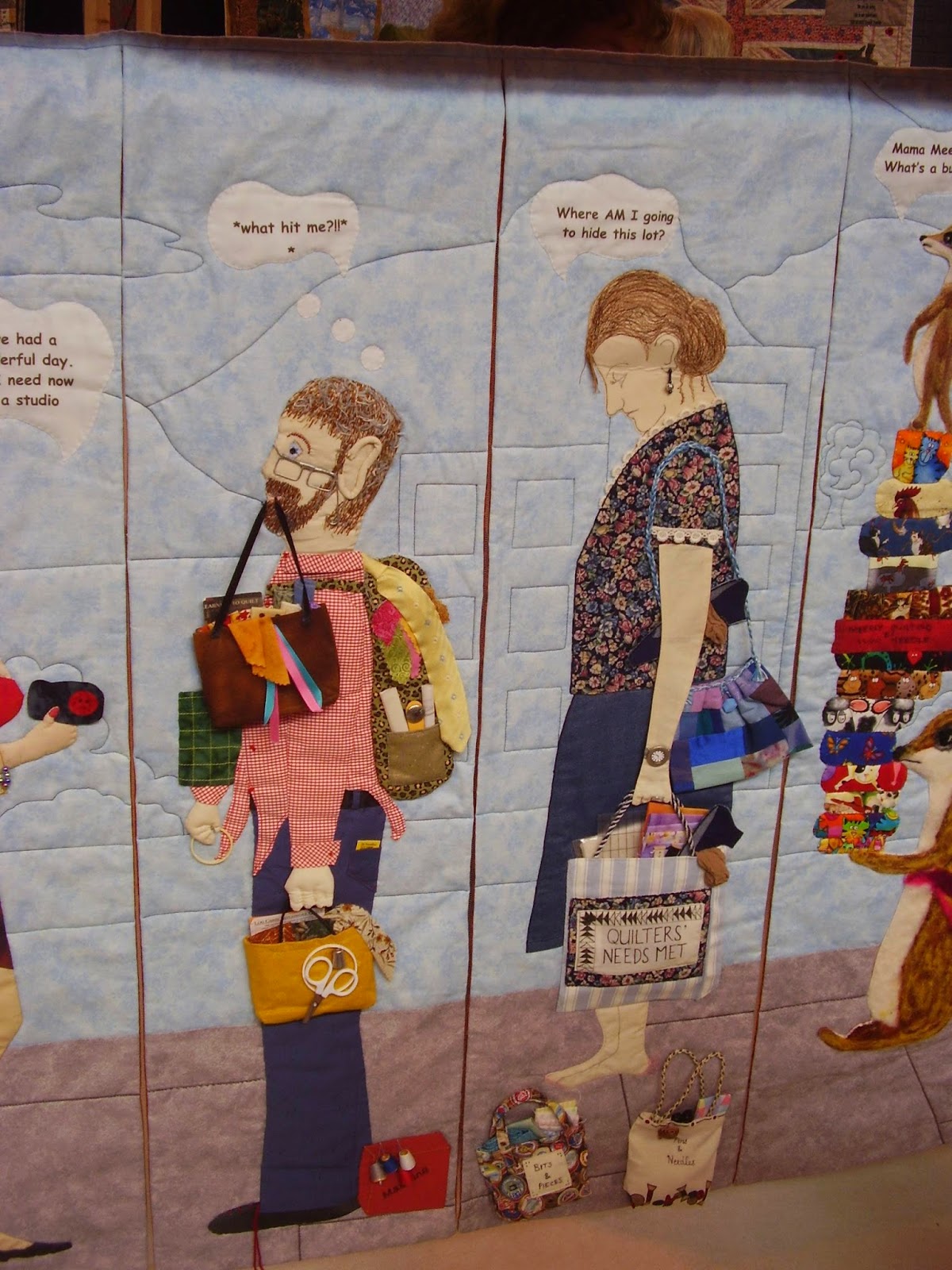 And last but not least this one really did it for me, it made me smile and I make no apologies for including all the 'detail' shots, called 'Twelve Quilters Quilting' it was entered by Gillan Sutcliffe from Pembrokeshire 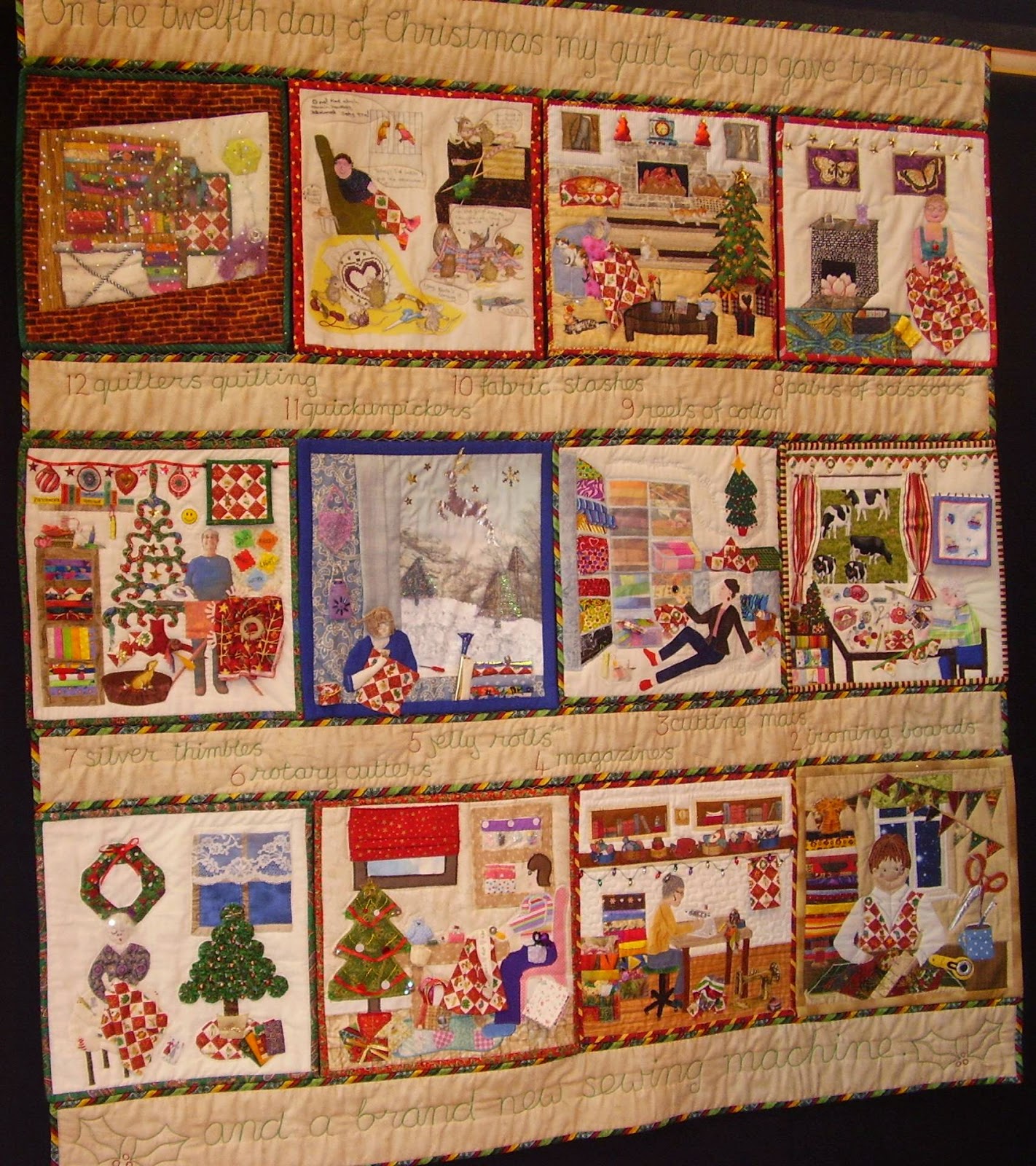 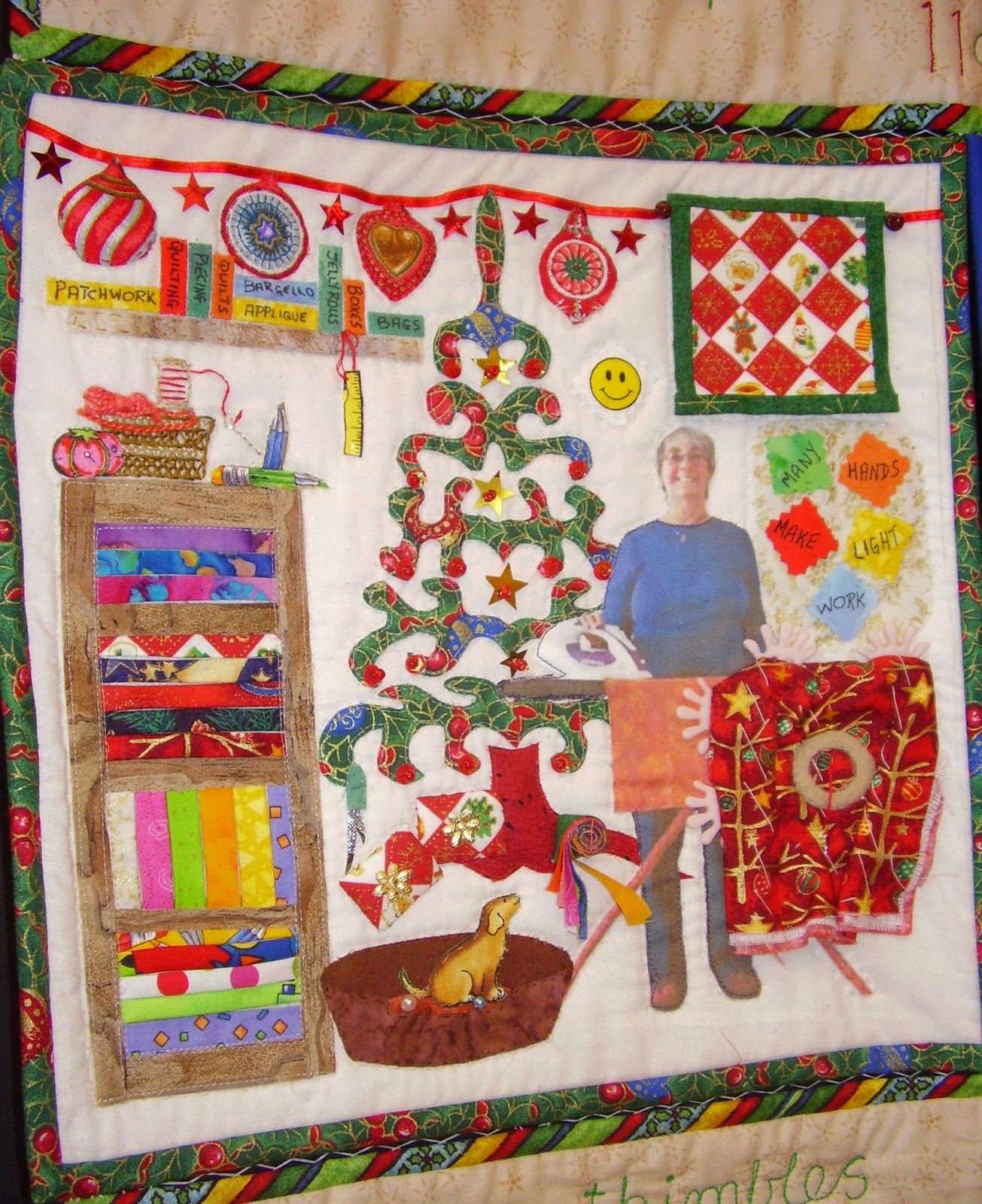 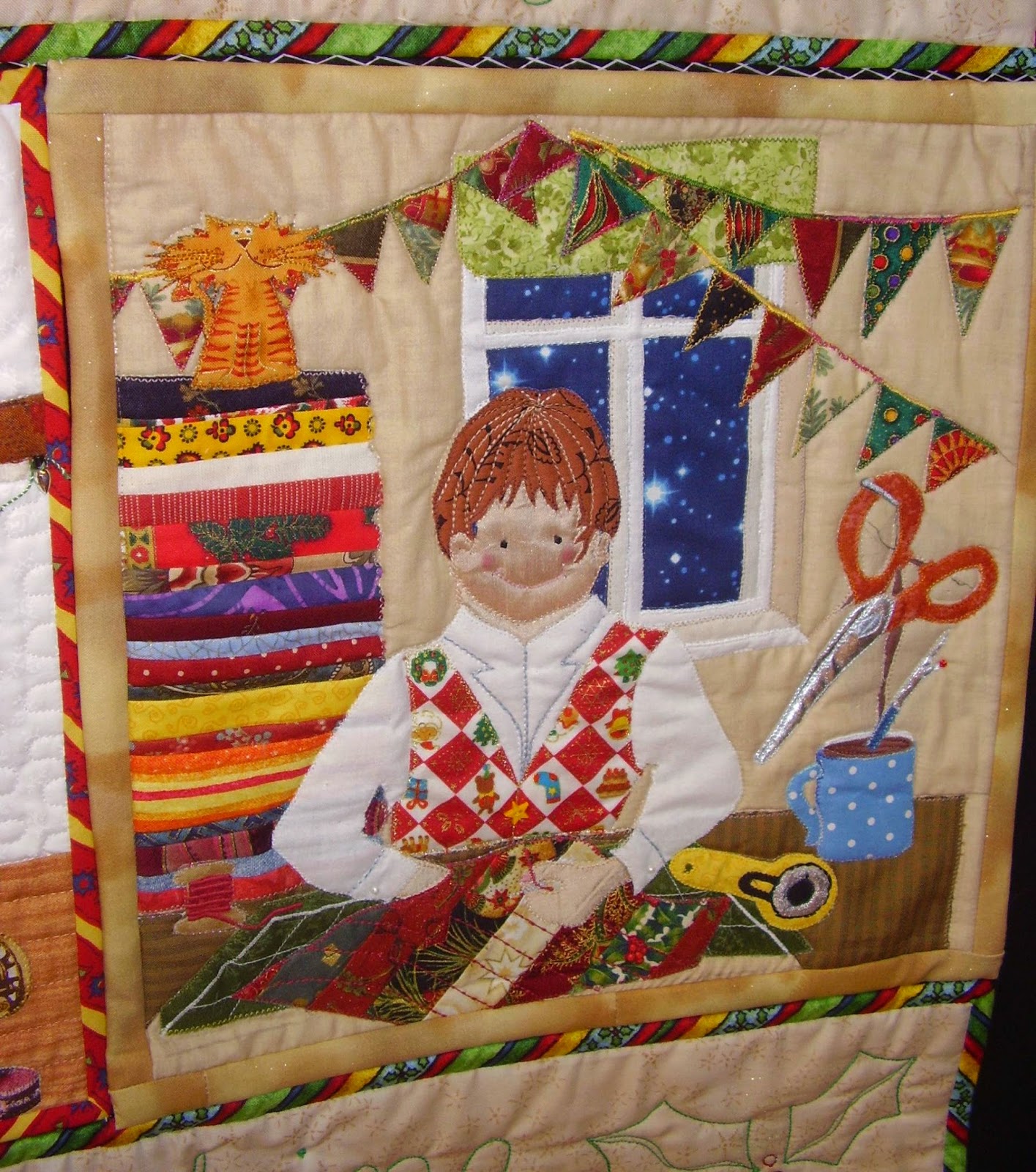 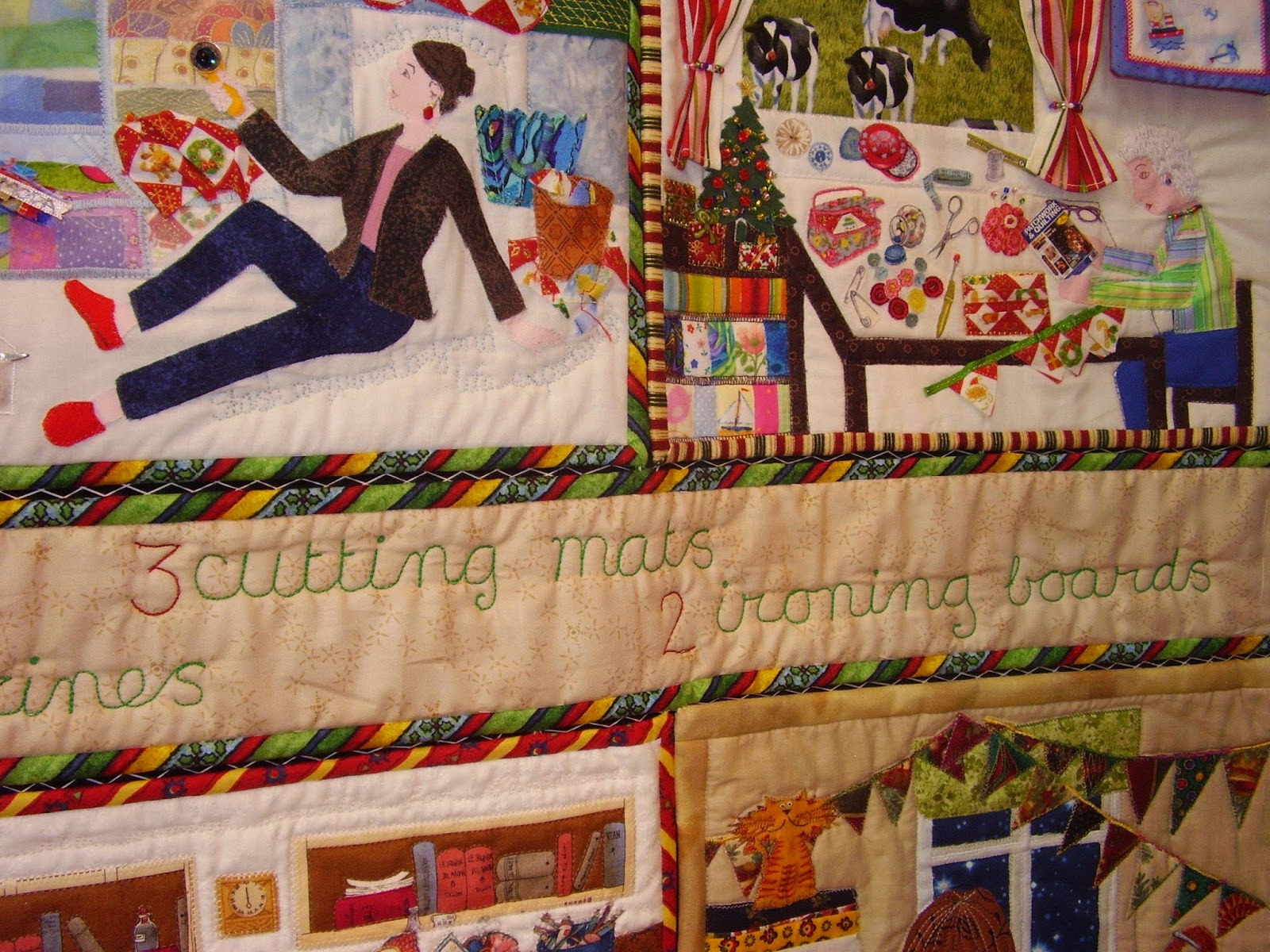 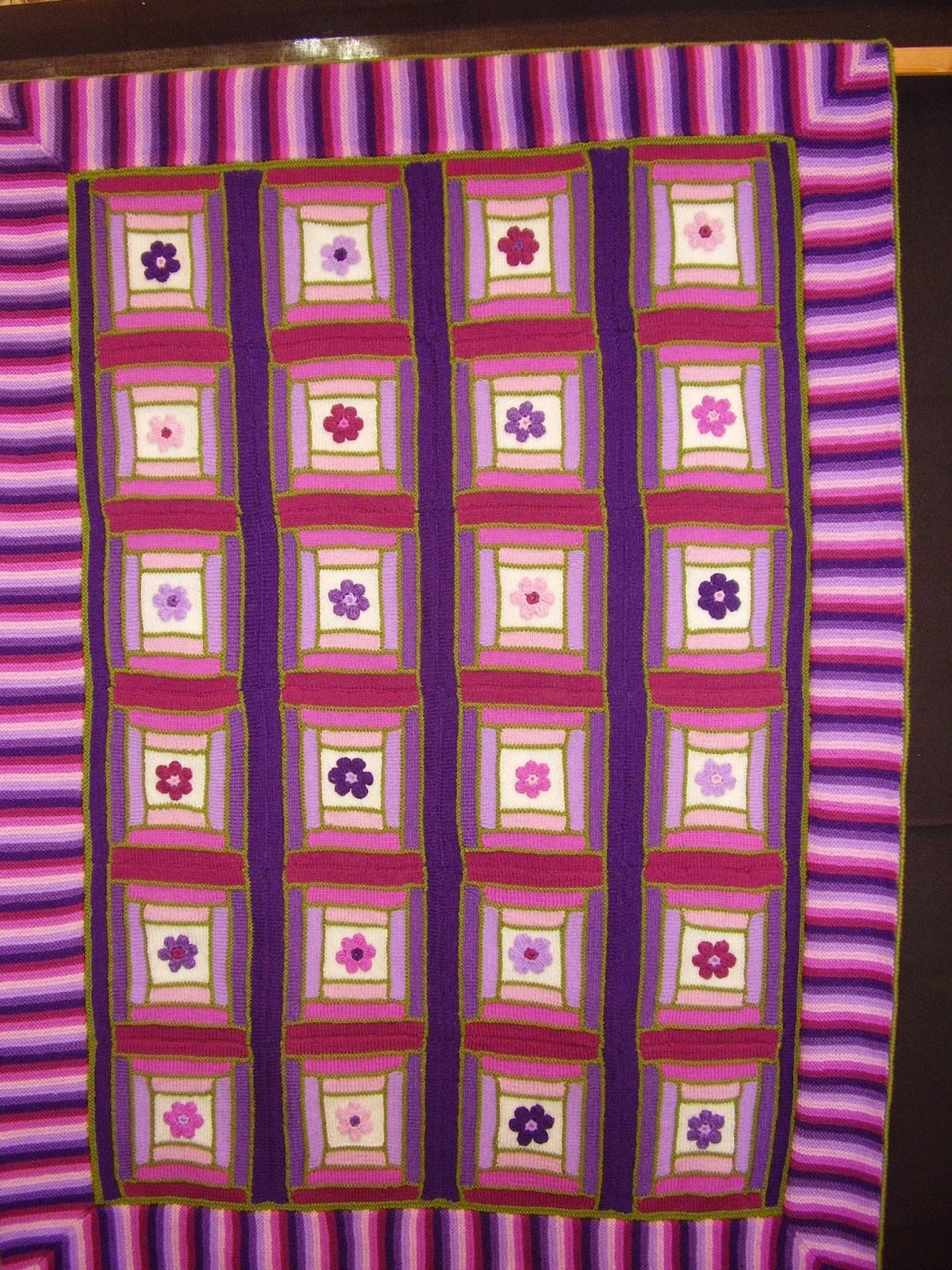 the above is actually a knitted quilt with crochet and hand sewing, made by Stoneliegh WI Knitting group its called 'Stoneleigh Steps'. AND THEN there was this, which left both Laura & I spellbound...Made by Cinzia White from Australia and titled 'Raconteur the storyteller's Collection' its a combination of ( & I quote) "Popular trends, Dear Jane, Samplers, Miniatures & Hexagons rolled into one" her use of colour along with the intricate and oh so perfect piecing were a joy to behold. Truly Beautiful!! 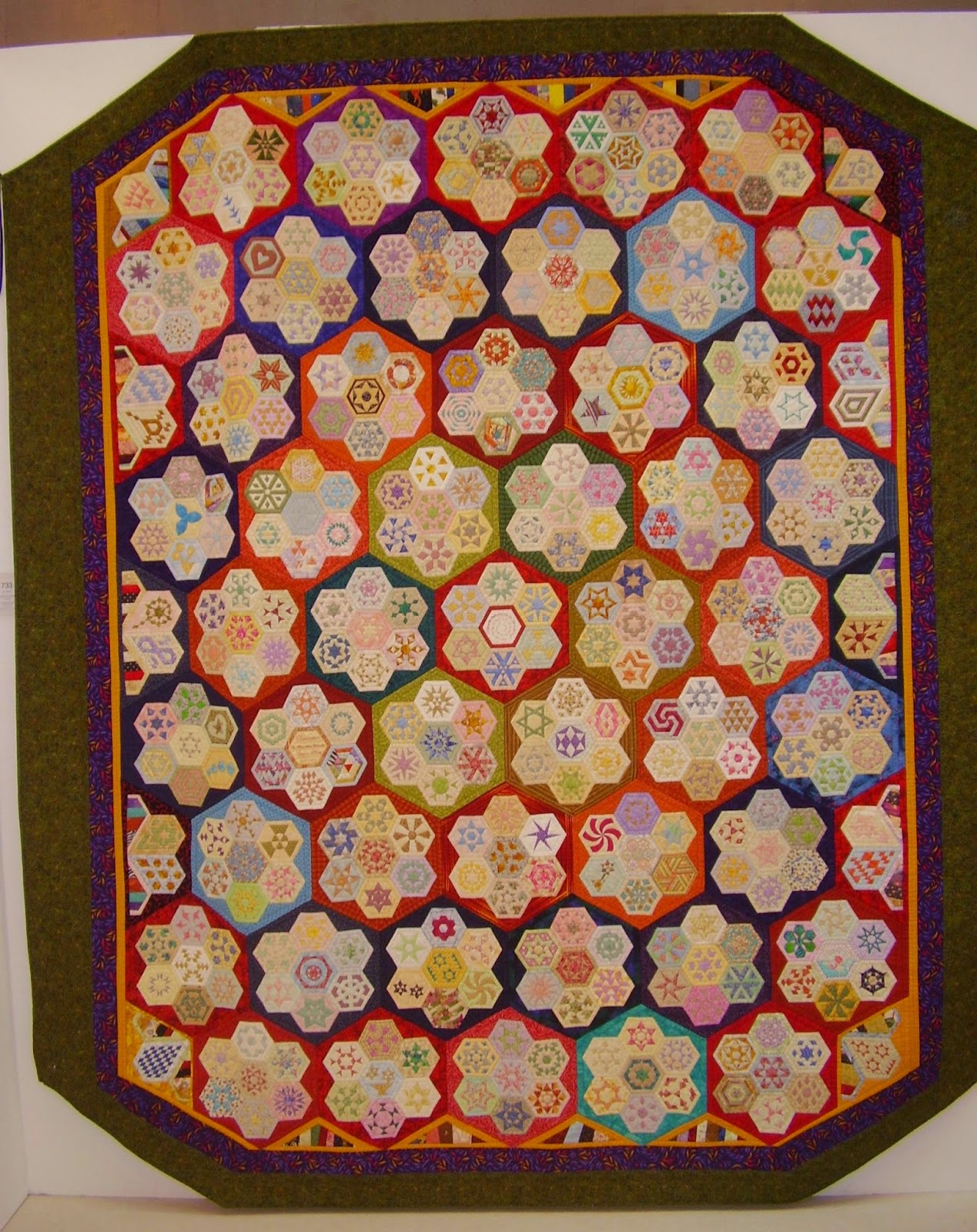 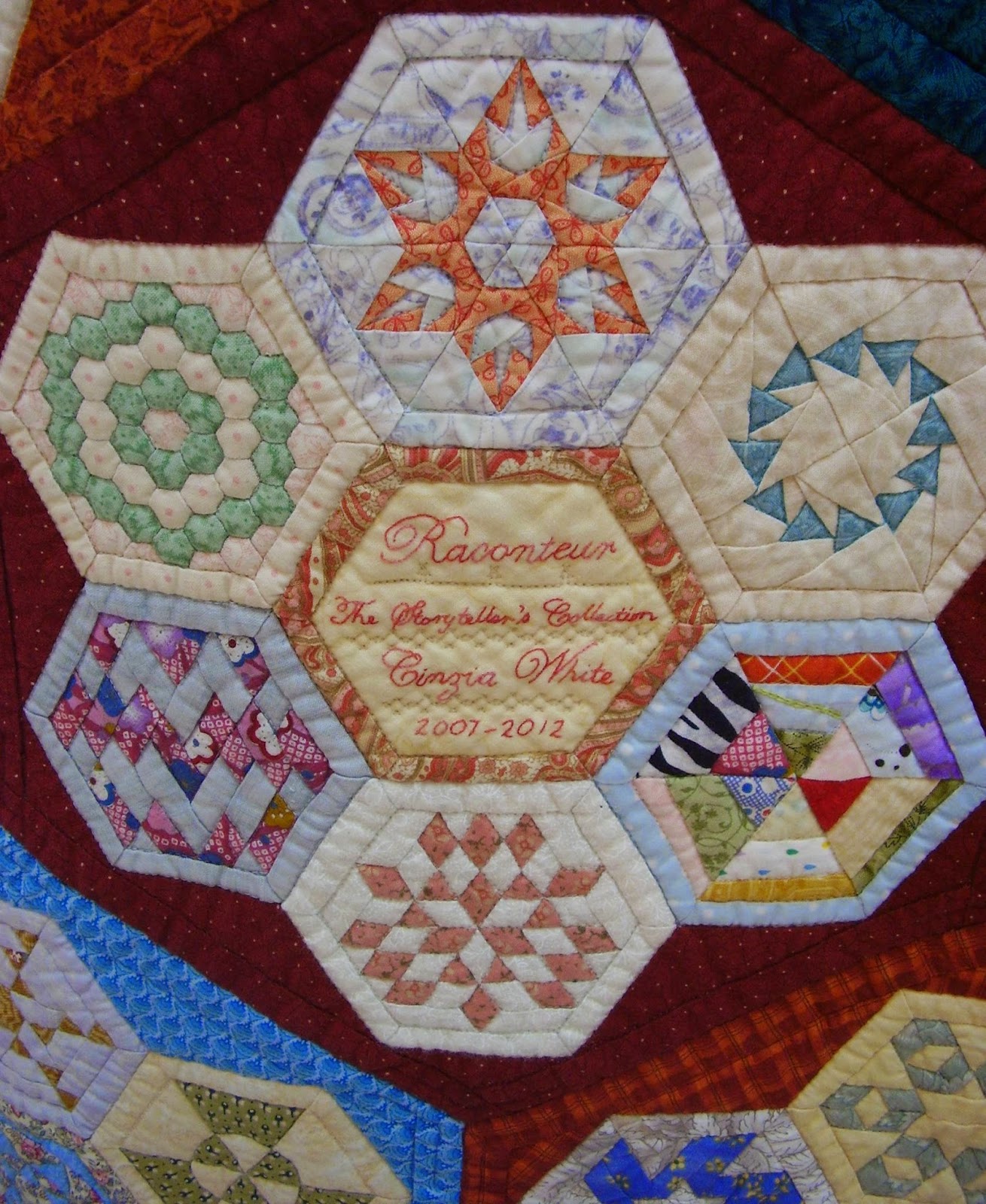 Now about that hexie project mentioned earlier... I came across my Hexie project Box and thought I would just make one or two to 'keep my hand in' and it's now become a proper project with a recipient in mind but I can't show too much or it may spoil the surprise but this is the pile I have so far 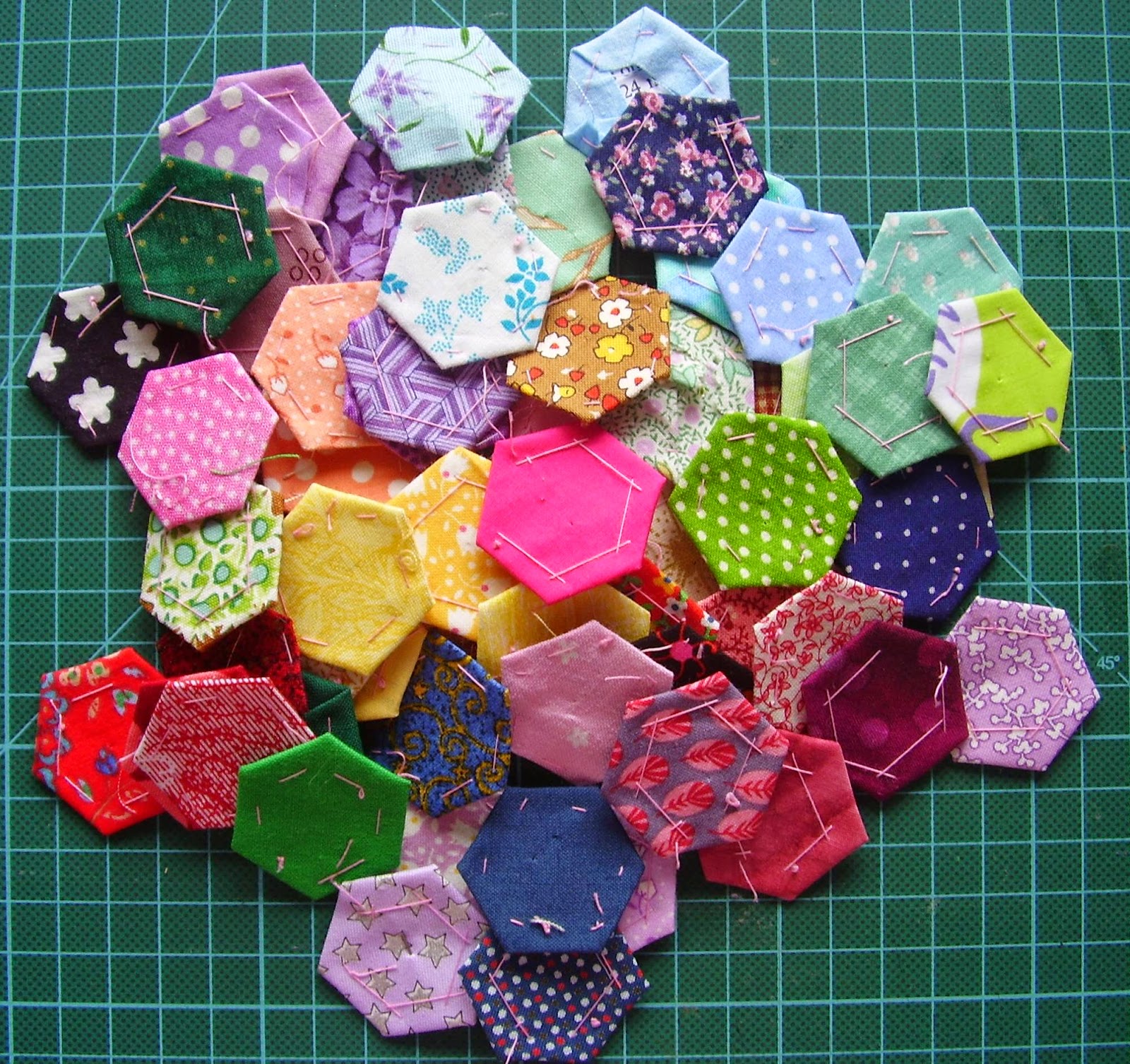 I'm even fussy cutting some patches to make her smile! I will keep you all posted when it's safe to do so! 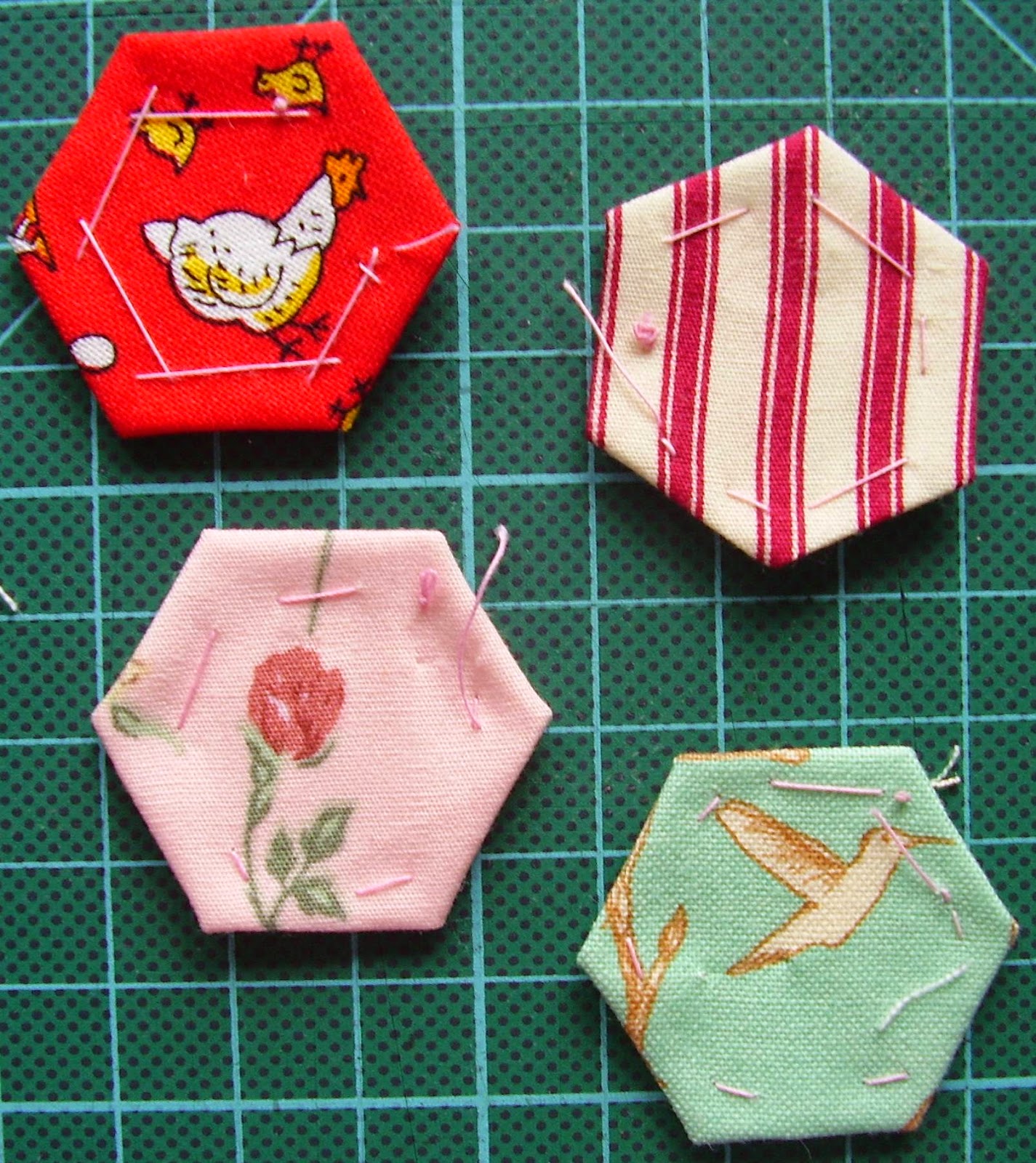 well I did say this was photo heavy so I will leave it there and hopefully be back before you know I'm gone!!!
Byee for now
L