included some sewing but well you know how these things are.......... I had to go out to the Post Office to get the Coaster swap on its way and pick up a few things for Mum and suddenly 2 hours had gone by,  I spent a little while with Mum, came home for lunch and then up to the workroom and OMG the floor was a mess.... out came the vac and it now looks much better! but.... as SVQ have a small exhibition at the local Flower Show next week I thought I should check for urgent emails and have a look at a blog I heard about today and suddenly its 5pm and I have not sewn a stitch!!! So I thought I would come over here and chat to all you quilters out there, first up another finish is ready to share, knitting this time not sewing but I am quite proud of this as it's the biggest thing I've ever made using 4 ply yarn. 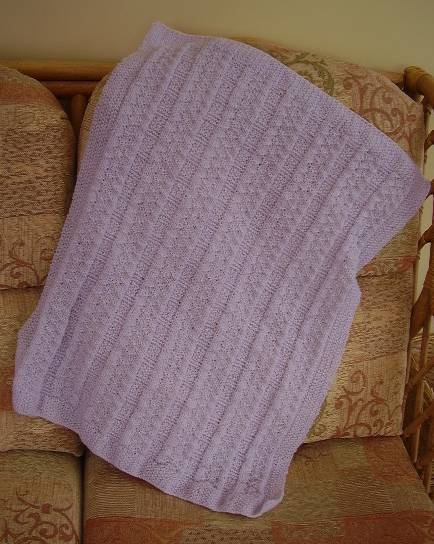 This is the baby blanket I told you about a few posts ago, its a really easy pattern but I found it needed a little concentration, The picture of the detail is a little hard to see but basically the wider stocking stitch areas (over 11sts) form little diamond shapes with 6 rows of garter stitch and 6 of moss stitch in blocks (over 6sts) between. I intend to enter it in the show next week plus a few other bits and pieces if I can. I have loads more of the yarn and hopefully I'll make another one and adjust the pattern slightly so that it's the same but different (if that makes sense!).
I have large project on my design wall (for design wall read 'pinned to the wallpaper'!!!) Some of you may remember a post in late Aug 2011 about some Round Robin Random Log Cabin Blocks to turn into charity quilts at SVQ.. well I went on making  6.5" blocks from my scraps but finally I've decided it's time to stop and join them together, I started by joining them into fours and once I had 9 larger blocks, I then decided to 'break them up' with some solid blue sashing and sashing squares, unfortunately as they have been made over a long time some of them have stretched a little, plus some were sewn by hand and the rest on 3 different sewing machines so the 1/4" seems to vary.  I will have to adjust the sashing to fit, but so far its not going to badly. 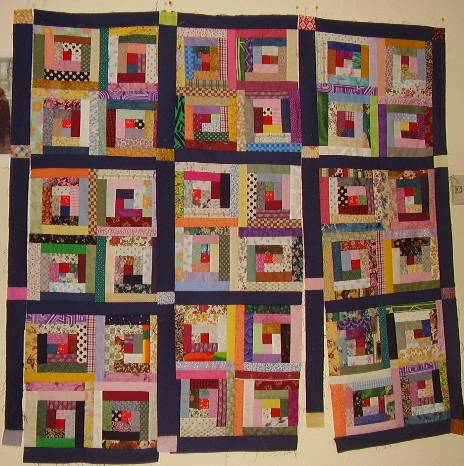 I am quite pleased with the way its working out I know the red centres are not all in the same place but I hope that adds to the randomness of the project and I think it will probably go to the Children's Charity project at SVQ later this year as its bright and colourful. Now all I have to do is decide what to do with the other 119 x 6.5" blocks that are left!! I had not realised how many I had made, Oh well! back to the drawing board! as they say.
Well that's all for now.
see you all soon.
L
Posted by Lorraine at 18:08 2 comments:

Hello everyone, Yes I'm here again after a few weeks 'missing in action'. I am STILL having problems with the car again on the way to DD's and AGAIN with the brakes which this time seized up completely so another man in a yellow van was called for and this time the car has been at the garage for a week, to say I am fed up with it is the understatement of the week. I have been staying at DD's doing some babysitting and helping her with the publicity for her new job, last Monday 4 of us delivered 1,700 leaflets in the area around her venue... Phewww!!!I'm still stiff from all that walking.
Last time I promised you all a 'look see' at the NEC pictures I took so I'll start right here with a few that really caught my eye. I tried to remember to get the makers names this year so full credit can be given where it is due.Plus I have been doing some sewing and have a finish to share with you Yes I said A FINISH! Details at the end. 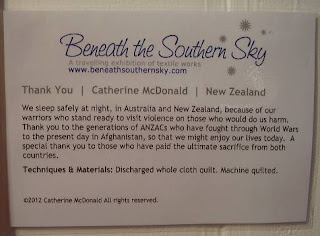 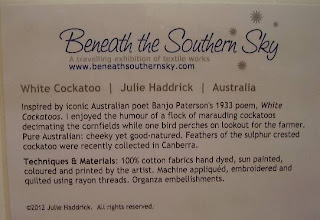 Now on to that FINISH, this is something I have had on the go for about 6 months, I got the pattern for the Redwork embroidery by Lenna Green as a free download when I  joined the website of the Stitching Cow a great Australian blog that I follow. I fancied doing some embroidery and this caught my attention, having worked the embroidery I thought it would be nice as a small wall hanging as I quilted diagonal straight lines, then used some pretty 'christmnassy' fabric from the stash and hey presto, I even made a label using the text on my machine. I hope you are impressed as I don't usually have anything to do with the 'C' word till at least mid November then decide it's too late to start a project for this year. My current Hand sewn project is a needle case made from felt also a free download but I can't remember where from (Sorry!! if it was your blog do let me know then I can send you a picture of the finished needle-case). Well thats all for now folks.
See you soon (I Hope)

Hi there everyone,
First up I notice that I have a new follower so welcome to Sarah Lizzie, great to have you along, I've also been in touch with Dominique from Bedford, Nova Scotia after leaving a comment on her blog, this is what I love about blogging and quilting you meet all the nicest people:-))) They both have great blogs so do drop in and say Hi won't you?.
The good news is thankfully my 'poorly' DD is now all recovered from the dreadful virus that she had, AND my 'poorly car is all better too (Whoo Hoo and Yippee!!)
Today has been spent as a WIP's day, I don't have many of those (WIP days I mean not actual WIPs I have FAR to many of those to mention!! LOL) On Saturday last I went to the Summer SVQ Sewing Day and made a 'proper' start on my Coaster Swap, I now have my swap partner, Irene from Great Yarmouth, we have been in touch to introduce ourselves which was great fun! I had already sorted out some nice bright fabrics, (Irene said to I could 'do my own thing') and traced off all the pattern pieces onto bond a web so on Saturday I cut them out and got them all onto the background squares, the backs of the Coasters are pieced so today I made 4 x 5" pieced blocks which if I say so myself all came out OK. The wadding is cut and hopefully some of the machine quilting will be done tomorrow. Here's a sneaky peek, but I'm trying to not give too much away!! 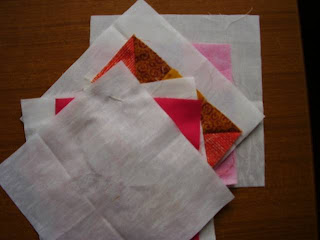 Next up on the WIP list is this little Wall hanging, which I made as a sample in 2009, I was asked to run a Stained Glass Workshop by some of my friends and I wanted an original idea. I found this greeting card at the Malvern spring show and used that as my inspiration
This is a photo of a finished wall-hanging made by Innes at the workshop 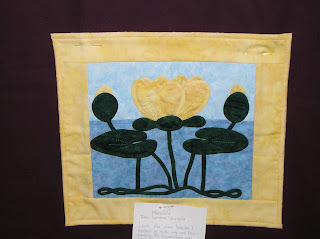 I'm in the process of knitting a baby blanket in a pretty lavender 4 ply yarn, it's only a 12 row pattern but I'm taking it slowly, so I get up early and work on it, I did try taking it to Knit and Knatter, but got in a muddle and sat in bed later that night and unpicked about 2" (YES! I'm really that sad I knit in bed some nights!) and it's fatal to try in front of the TV, I want to get it done by beginning of September then I can enter it in the local Flower Show on the 7th.
On Monday I took the plunge and went back to Slimming World and joy of joys I had only put on about 4pounds since January, a bit LOT less than I anticipated, I got really bad at going during the stress of the early part of the year and then stopped altogether at the end of March. As an added measure I have also started walking again, I love the early morning walks I take when Ted is staying so I decided to start doing that again, I get up around 6.30am have a quick cuppa and off I go, I walk for around 20 minutes then home for brekkie, more tea and a spot of knitting! On Saturday I'm off by coach to the N.E.C. for the Festival of Quilts so I'll walk to the pick up point instead of trying to fit it in before I go, unless it's raining in which case DH will have to get up early and drop me off, then with all the walking around the show I should be able to have a rest day on Sunday.
Well that's me for today, I'll try to pop in with some F.O.Q. pictures next week, till then
Toodle Pip!
Posted by Lorraine at 19:39 6 comments: