I have not been idle, despite the weeks going round so fast, (August gone already? I think I blinked and missed it!) so I will bring you up to date over a couple of posts. Saturday the 8th saw a bus load of Severn Valley Quilters and friends setting off early to the Festival of Quilts, sadly at the last minute without the lovely Lisa who was unable to join us due to family commitments.
This meant I spent the day on my own which I was not looking forward to but, I have to admit that I actually quite enjoyed it. Arriving around 10.30am I was really surprised that it did not seem as crowded as in previous years, as you can see. 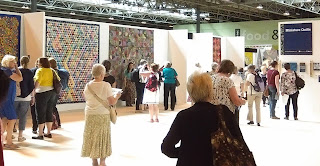 So like a woman on a mission (I was!!) I set off to get some free wadding from The Warm Company, next stop was Empress Mills to take advantage of an extra 10% show discount only available before 11am. With those jobs done, I decided to systematically walk round all the quilts, I thought there was a fairly traditional feel this year, and I spotted some really lovely entries, like this crazy quilt (of course!) which was an entry in the group quilts 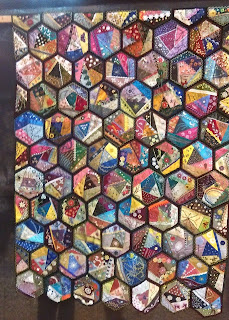 the Herringbone stitching between all the hexagons was beautiful as were the embellishments. 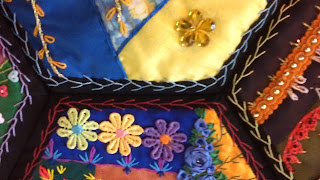 this Blackwork quilt really made me smile with all the cute snowman and some lovely crisp piecing. 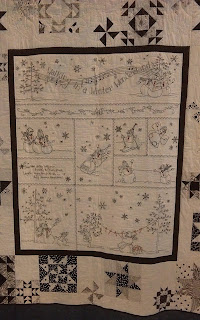 The Galleries were amazing as usual, I spent some time talking to a lovely chap from Mexico, I was really surprised to hear that there are quilters in Mexico (I don't know why but I was!!!) and the quilts were really vibrant and imaginative.... unfortunately I don't know what the messages were saying on here. 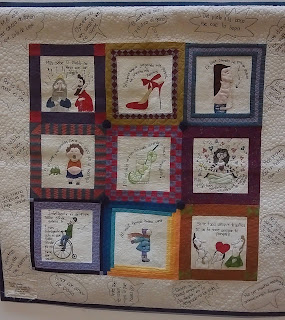 and this very clever Chess set was attracting lots of interest 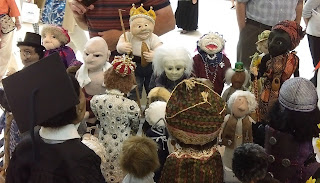 Last but not least were these two stunning Log Cabin quilts by Luke Haynes entitled 'Pennsylvania', At first glance they looked  fairly monochrome but as I got closer I could see there were other colours in there too. 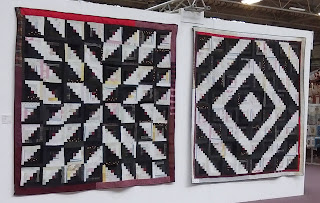 These were for sale at the mere cost of £15,000 I'm not sure if that was for both or just one!!! but I decided that I probably couldn't quite afford it with the cost of my new Workroom. LOL
Progress on said room has been a bit slow of late as DH was laid up with really bad muscle problems in his neck and shoulders for almost 3 weeks, so bad in fact that after 2 days he voluntarily went to the Dr. so it must have been bad. We have been married for over 40years and I think in all that time he's only sought medical advice around 5 or 6 times, and usually only after I have put my foot down and insisted on it. The outside work on the BIG BUILD is now finished so if the weather goes bad there will be plenty of inside jobs to be done. DH and I had a 'site meeting' about 3 weeks ago when I had to decide where and how many power points I needed, I settled on 6 doubles (do you think 12 sockets will be enough??? LOL) the boxes for these have been put in and the wiring is all in place. Next the ceiling needs to go up in the garage so that we can insulate and put floorboards down inside. I am busy trying to sort out a few things in my existing workroom, deciding what to keep and what has to go.
As I said at the beginning of this post I have not been idle, there has been lots of knitting and lots of hand stitching plus a Cream tea to attend at Clock Tower but I will come back here in a few days and show you the progress on a few things.
Nighty Night I'm off to bed.
Lx

Posted by Lorraine at 22:45 No comments: